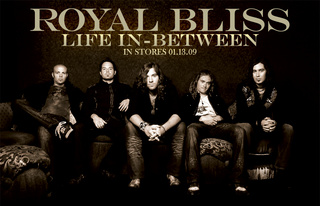 Royal Bliss is modern rock with equal parts beauty and tragedy. The band has already been through enough to justify their own VH1 Behind The Music episode complete with addiction, near death experiences, car crashes, and law suits. Hailing from Salt Lake City, Royal Bliss gradually came together after high school when guitarist Chris Harding stumbled into a pizza parlor where frontman Neal Middleton was playing a solo gig. "I told Chris I would love to sing in a band and he invited me to jam with his band at a rehearsal" says Middleton. "That night we instantly clicked and wrote four songs." The next day Middleton dropped out of college and quit his day job to pursue the rock n roll dream. For the next few years Royal Bliss built up a loyal fan base the old-fashioned way--on the road. The band recorded a demo and thanks to their hook-laden songwriting ability, synergy and stage presence they were able to sell over 8,000 CD's on their own. In 2004, the band started to generate major label interest, but it all came to a halt when Middleton was seriously injured in a near fatal accident that left him paralyzed in a wheel chair. After months of rehabilitation, Middleton miraculously got back on his feet and was able to walk again (he still has only partial feeling in his right leg). The band regrouped and decided to push forward. They headed back into the studio for some of the most intense studio sessions they have ever encountered. During the recording, tragedy ambushed the band again. Drummer Jake Smith flipped his car five times after leaving the studio one night and Harding sliced his face in half while skiing. It was crazy" states Richards. "Jake had just finished recording his drum tracks when he left the studio the night of the accident and I actually went with Chris on the skiing trip. I was skiing a different slope, so I didn't even realize that it happened until I saw him with his jaw wired shut." After the smoke cleared, the band finally released their independent debut--the appropriately titled "After The Chaos II". Combining elements of classic rock and modern indie rock, the band received rave reviews and played shows across the U.S. Supporting artists such as Kid Rock, Maroon 5, Hinder, Three Days Grace, and Buckcherry. After the initial release of "After The Chaos II" in 2005, The Control Group, an independent record company out of Seattle picked up the record and gave them a nationwide distribution deal. While the band had substantial radio success in the past, the albums first single "Devils and Angels" took them to a whole new level. A number of stations across the US including KHTB/SLC, KZDX/Idaho, KCVI/Idaho, KOMP/Las Vegas, WIIL/Chicago, and KEYJ/Abilene, TX started spinning the track and it instantly became a top requested song exploding Royal Bliss to 1 airplay at both rock and pop radio. “After The Chaos II” sold a staggering 12,000 units and at one point, their album was selling 1 at the Gray Whale music store chain (outselling numbers 2-5 by a combined total of nearly 8 to 1). At that time Virgin Records president Jason Flom took notice and immediately signed them to his new Capitol Music Group Label under EMI in May 2007. That summer the band headed off to Portland, OR to record their major label debut "Life In-Between" with producer Rob Daiker. Working with Rob, we were finally able to record the way we wanted" states Middleton. "Our past recordings were done in a living room and a kitchen. This time around, we all recorded in the same room and captured the feel of the band". "There were multiple strip clubs to keep our head in the game" adds Richards with a smile. Life In-Between" is the band's most honest and personal material to date. "All of the songs are sculpted out of life's hard lessons." says Middleton. "We went in with 30 plus songs and narrowed the record down to 12." When asked about the meaning behind the bands songs, Middleton explained "Devils & Angels" is about feeling like your stuck in the middle and having to make a choice. It's kind of like the old cartoons when the main character would have an angel on his right shoulder telling him to do the right thing and the devil would be on his left shoulder telling him to do the opposite. The song is just about internal struggles." We Did Nothing Wrong" was written about all the crazy shit that's going on in the world from a kids point of view. It's about war, global warming, and all the other stuff that the kids are inheriting from the older generation." From the album starter "Save Me", written about Middleton's personal struggles with alcohol, drugs, and transition into adult hood to "Here They Come" about dealing with people trying to inflict their point of view on you, the album is filled with big riffs and memorable melodies that instantly get stuck in the minds of everyone who hears them. The elements of life lie in the process and the adventure, these songs are the result of that journey, a place where tragedy and beauty can exist side by side, where every emotion is valid and every emotion is needed. Such is the essence of Royal Bliss.

Best Album of The Year???? by Blogs N' Roses
There is something for everyone on this album. The production quality brings just the right elements from the band to the foreground. It is a rich tapestry of rock guitar, controlled screaming, and...
This is just plain out amazing! by The Rock Dose
This band is exactly what modern rock needs in this age.
p
A
n
E
F
Song Title by Artist Name