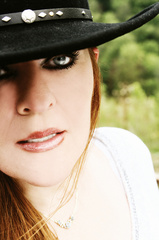 RUSTIE BLUE enjoys entertaining people. When she’s performing, she wants to make sure everyone in the audience is having as much fun as she is. “It is really hard to keep me up on the stage. I like to get down where the crowd is. When I’m singing, I’ll dance with them.” Another aspect of fun in Rustie’s shows comes from her unintentional comedic antics. “I don’t have to tell jokes to be funny on stage, she confesses, “Because I’m so accident-prone, that makes people laugh.” To date, Rustie has gotten her hair caught in a sweeper, caught her hair on fire, almost fallen off the stage, and tripped over her own feet while learning a line dance. “When I was on tour in Europe, I was trying to learn to line dance, and I tripped over my two left feet. I literally slide under the table!”

She has, fortunately, fared better musically. Growing up in rural southeast Ohio, Rustie, her three sisters, and three brothers spent many hours entertaining themselves. “I can remember sitting in my bedroom and singing for hours! I’d also sing at family gatherings.” Though Rustie appreciates all types of music, two American musical icons, in particular, have been most influential. “My number one favorite entertainer of all time is Elvis Presley. I don’t think there will ever be another like him. I think he has helped me with the entertainment aspect. From the moment he walks on stage, he has so much charisma, people were just drawn to him.” Rustie also has much respect for Dolly Parton for being a savvy businesswoman and talented songwriter.

In the early 90s, Rustie began making several trips to Nashville in search of a record deal. Initially disappointed that the early trips produced no promising leads, she realizes in hind sight, that she still had yet to discover her own musical style. “Though I thought I was, I definitely wasn’t ready. My voice wasn’t ready. My entertainment abilities weren’t ready.” Back home, she began working on developing her voice and improving her stage presence. In 1997, Robert Keister, of Center Stage Productions, saw Rustie performing in a local club in Ohio. “He told me that he liked my voice but that I needed to be able to interact with the crowd more, not just stand up there and sing.” Rustie admits, “At that time, you couldn’t get me up on the stage for more than two songs, because the audience would expect me to talk to them. Well, I wasn’t scared to sing, but I was scared to talk!” Robert set out to help her conquer her shyness by introducing her to his show, Center Stage Legends in Concert. He already had cast members in place for Elvis Presley, Johnny Cash, Patsy Cline tribute acts – and was looking to cast the part for the Dolly Parton role. Though at first apprehensive about paying tribute to such a recognizable music icon, it was Rustie’s audience who helped her break into the role. “From the very first time I did the Dolly show, I had a great audience. They were really into it, and because they enjoyed it, I got more into it.” She held that gig for a couple years, before once again focusing on her own career. “Robert jokes that he hasn’t been able to shut me up since!” He remains Rustie’s manager today.

In 2000, Rustie released her debut album That Oughta Do It with “I’m Dropping Tears” being the kickoff single to impact overseas markets. After her sophomore album, Enter At Your Own Risk, was released two years later, Rustie headed overseas on a promotional tour, bringing her music to Denmark, Belgium, Germany, and The Netherlands. In 2003, Rustie partook in another tour across Australia (where she had the honor of performing at the 17th Annual Telstra Mildura Festival) and also New Zealand.

Momentum gained from Rustie’s critically acclaimed album, Chip, Chip, made 2004 another winning for her. Chip, Chip featured the title track hit duet with Bill Anderson, and the single received rave reviews. Renowned music journalist Robert K. Oermann proclaimed, "Rustie’s harmony vocal is on the money. The production thumps right along!” The song won Vocal Collaboration Of The Year in 2005 and staked out at the top of the European Country Music Association Chart for seven weeks! The following year, she stepped on the legendary Grand Ole Opry stage to accept an award for her duet with Bill. A nomination in the “Female Artist of the Year” category in the 2005 Music Box France Awards placed Rustie among big-name contenders: Mary Chapin Carpenter, Alison Krauss, Martina McBride, Reba McEntire, Shania Twain, and Gretchen Wilson! “Cloud of Dust” and “Don’t Come Cryin’” (from her Chip, Chip album) were both “picked” on the After Midnite With Blair Garner syndicated radio show.

More success followed in 2007, when Rustie entered the fan-voted Famecast competition. During five voting periods, her fans advanced her first into the Top 50, then Top 25, to Top 10, and finally the Top 5. Famecast flew all five artists to Austin, TX to compete for the title of Famecast Country Fenom; Rustie placed 2nd by just two votes.

Four years after the release of her last album comes Stronger Than Steel, and true to its title, the album showcases some of Rustie’s best work to date! She recorded all twelve songs in Nashville backed by some of Music City’s top studio musicians including Lonnie Wilson (percussion) and Larry Franklin (fiddle). Stronger Than Steel features two songs that Rustie co-write – the title track and “Cowgirls Do It Better.” Country Weekly magazine’s Senior Editor, Larry Holden, referred to “Cowgirls” as being “a rompingly funny look at the romantic world of guys and gals.” There are also three duets featured on the album. Rustie pairs with the album’s producer, Willie Mack, on “Stronger Than Steel” and “It Hurts Like Love.” The third is her hit duet with Bill Anderson, “Chip, Chip,” which is included as the bonus track. Another highlight is “Fall In the First Place,” the Terri Clark co-penned tuned. “This album has been a long time coming! I'm really fortunate to have such a great talent as Willie Mack to produce my new album and to have worked with some of Nashville's award-winning musicians!” Rustie says that, with Stronger Than Steel, she has hit her stride. “I feel as though I finally have found myself and voice in this album.”

About.com Hosts Listening Party for RUSTIE BLUE by
Lancaster, OH (August 20, 2008) – About.com: Country Music is hosting a Listening Party in honor of RUSTIE BLUE’s Stronger Than Steel album, and you’re invited! The listening party began online...
RUSTIE BLUE to Cruise With Kevin Richards! by
Nashville, TN (September 10, 2008) – RUSTIE BLUE has been personally invited by CMA award-winning radio personality, Kevin Richards, as a guest artist on the Kevin Richards Country Cruise! Other...
RUSTIE BLUE Featured in Country Weekly! by
RUSTIE BLUE Featured in September 8 Issue of Country Weekly!Lancaster, OH (August 25, 2008) – RUSTIE BLUE is a featured artist in the NEW issue of Country Weekly magazine! The issue dated September...
RUSTIE BLUE'S Fourth Album Is STRONGER THAN STEEL! by
Lancaster, OH (July 25, 2008) – RUSTIE BLUE’s highly anticipated fourth album, Stronger Than Steel, has been set for release on August 26, 2008! This is the follow-up album to her critically...
Conman Radio Shines Spotlight On RUSTIE BLUE by
LISTEN UP: Conman Radio Show Shines Spotlight On RUSTIE BLUEEnglewood, CO (July 17, 2008) – RUSTIE BLUE will be on The Conman Radio Show TOMORROW evening! She is the featured artist in the "Bar...
Rustie releases "I Break Things" to Radio by
RUSTIE BLUE follows "One Hot Summer Ago" with "I Break ThingsNashville, TN (October 14, 2008) Center Stage Production's Rustie Blue has two singles on the prestigious HotDisc Top 40 Chart this...
RUSTIE BLUE says "Cowgirls Do It Better" by www.rustieblue.com
Nashville, TN (April 28, 2009) - Center Stage Productions recording artist, Rustie Blue's new single, "Cowgirls Do It Better" hits The U.S. Airwaves this week via April's M-T-M #34 Compilation,...
Rustie Blue Has Landed Another #1 by www.rustieblue.com
One Hot Summer Ago" is one of the most beautiful ballads of the last years. A song to love and cry that works deep inside your heart, thanks to the wonderful and technically perfect voice of Rustie...
Rustie Blue Nominated for Top European Award! by www.rustieblue.com
Nashville, TN (July 7th 2009) It has just been announced that Rustie Blue has been NOMINATED in the prestigious 2008/2009 ECMA (European Country Music)Annual Awards in the category of "Female...
by