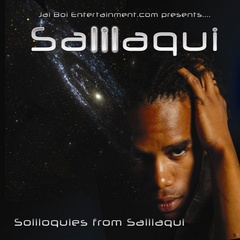 Everybody claims to be different, but unfortunately everybody doesn’t have true originality or a new style, yet to be seen. Everybody claims that they have the next big up and coming superstar, only to result in disappointment, and being unimpressed, once again. So, with that being said, I’m not going to try and sell you on anything. I’m just going to introduce you to

The word soliloquy, means “to reveal his or her thoughts or express oneself” and though pronounced the same, but spelled differently, is exactly what the artist named Salilaqui does. The genre that Salilaqui has created has no name for itself because it is an image of himself. So, I guess you could call it soliloquies from Salilaqui. The material that Salilaqui creates comes from deep within his subconscious communicating to his conscience mind where his inner self converses with his outer being , bringing lyric and melody to fruition all coming from the same place, which is the reason why he is artistically known as Salilaqui. From these soliloquy’s, Salilaqui creates what mystically takes shape and melodically evolves into song.

Salilaqui is a 20 year old virtuous spark resembling some of the great leaders who came before him. Salilaqui uses his craft as a tool to touch your inner senses, as he delivers messages through melodies, moving you as a listener. Some would say his music is different, he says smiling “if that’s what makes the difference” I’m all for it. In earlier interviews, he states that those who are truly gifted with music, it is our mission to raise the consciousness of the people. More so than just entertainers, we are deciders of the future with the influence to move mountains with our very voices. And Salilaqui deeply fortified with emotion powerfully states, “I want my words to have such an effect, that they walk on water an heal the sick as if THE MOST HIGH, HIMSELF, wrote them and miraculously spoke them”.

Salilaqui, who writes all original material, brings new music to the ears of the industry fulfilling what he terms as destiny, while creating a new sound in an untapped market where there is virtually no competition. When Salilaqui was asked, how he would sell potential fans on his new sound, he responded in a humble manner, “I would prefer to just let the music speak for itself” because there is a new order of music ushering in, and artist today are changing the sound of music as we know it.

Further more, it doesn’t take an artist to understand,
You only get part of the story from a bio,
The Music Tells The Rest