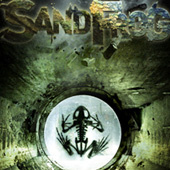 Sandfrog is a well oiled, heavily greased, and full steam engine that is traveling full speed in the music world and the only direction to go is up and with no slowing down in sight. Established by lead vocalist, Scott Spiezio (2-Time World Series Champion), he has teamed up with Morgan Rose to fully produce the band's first album release titled "Face Down." Steve Underwood pedals the drums to new speeds and thunderous hits heavily complimented by the dark bass riffs of Jon Underwood, and the ravaging guitar riffs of Chuck Butts and Alby Odem. Together they are taking the music world by storm. With heavy music placement on the ESPN Network, the Sandfrog sound has been described as a cross between Sevendust and Disturbed. Spiezio has hit a grand slam home run with this first album release and rumors are already flying around about a second release with more celebrity producers from iconic and pivotal bands who made historical marks in music and impacted the world in their own musical revolution. Marc D Birnbach, band manager, recognized the during the 2002 World Series games when Spiezio took Birnbach's beloved Yankees out of the running. Birnbach contacted the band and produced and directed the band's first professional music video. It sparked a relationship between Underwood, Spiezio and Birnbach that has lasted almost over five years and Birnbach says, "Spiezio is a wild child. His off the field life is driven by his love and passion for music. During my eight years as the Senior Music Coordinator for the ABC Television Networks, I have never come across a more promising band completely independent from music labels, PR firms, and management companies. Sandfrog is ready to take on this world. My only question is if the world is ready for Sandfrog?" Well ESPN answered and said they are ready and have heavily placed Sandfrog into its Boxing matches and will be branding Sandfrog as the theme song for all NCAA games to broadcast on the ESPN Networks. Sandfrog will be touring shortly around the US and heard on radio stations across the US. Don't get stuck under a Lilly Pad. Come out from the pond scum and get yourself ready for Sandfrog.

A sandfrog who likes to pick it and get dirty by By John Hayes, AP
Anaheim's Scott Spiezio is something of a Renaissance man — with an edge. A free spirit with tattoos and slicked-back, jet-black hair, he is also a first baseman who can play second and third, and...
p
A
n
E
F
Song Title by Artist Name