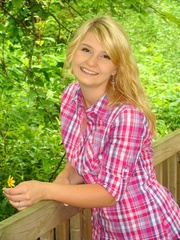 At twenty years old, Sarah is a very dedicated musician. She has been singing for an audience since the age of eight, starting in church as many vocalists have done. She has been playing fiddle since age fifteen, mentored by other musicians, many of which are her family members. Sarah has a rich musical heritage with her grandfather, Max Brown, who is a former Nashville recording artist, her mother, who is a songwriter, great uncles, and even great grandparents who were musicians. Sarah is very thankful for her band, Sundown, for all the wonderful musicians who have helped and encouraged her, and for her audiences, both live and online. Sarah completed her primary education in home schooling so she could devote more time to her music, and began playing with her first band at age sixteen. She was introduced to Cal Denison who produced and arranged Sarah's CD, "'63 Chevy Nova", and her music video, "If I Never Love Again. Sarah decided to take advantage of the online opportunities for self promotion and entered a competition for the Next GAC Star. Her video was aired on GAC TV in July of 2008. Local media has been very kind to Sarah, interviewing her at length. She is also the subject of a feature article for Stardom E-magazine due to launch this fall, and will be doing a live radio interview in Springfield, where her song "'63 Chevy Nova" is among the top requested independent releases. She is currently holding top twenty positions on several web sites and continues a full performance schedule as well. Sarah's vocal influences have been Reba McIntyre, Allison Krauss, Patsy Cline, Ella Fitzgerald, and Etta James. With a deep love for bluegrass and Texas swing fiddle, Johnny Gimble, Sara Watkins, and Stephen Grapelli are also among her musical influences. For her future, Sarah can see no other way of life than being a performer and has dreams of one day having a song on the charts and a completely full tour schedule.

Sun Rises on Sarah Dunn, Sundown by The Joplin Globe
The 19-year-old country performer from Neosho and her band, Sundown, may be ready to step into the spotlight. They recently finished their first CD and had a music video featured on a national...
Illuminated From Within by Quinlin O'Connell, Writer
Absent of compartmentalized stereotypes, Sarah and Sundown strive to “incorporate all elements of music from legendary to contemporary even to imagine what music will sound like in the future and...
Independent Music for a New Generation by The Neosho Daily News
Even as her star is rising she wants to keep that connected element. ...“I want to be that one in a million performer that still has a personal connection with her audience no matter how big the...
p
A
n
E
F
Song Title by Artist Name