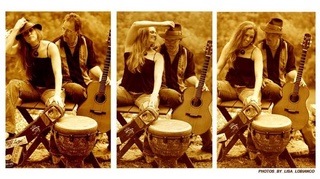 KERRVILLE FOLK FESTIVAL’S, NEWFOLK FINALISTS 2004 and 2007!!! CD, Thinking Out Loud, #12 on International Folk Charts Folk Alley’s artist of the month in 2008 The fresh and soulful sounds of Scott and Michelle’s voices, combined with their high energy performance, memorable and meaningful songwriting, and instrumental finnesse, put them in a category all their own. Said to have more sound than two people should be allowed, acoustic Rock or Folk genres could very well hold them but not completely. They dip down into R&B, Jazz, roots, and Blues showing the versatility of this duo. Since their Kerrville Folk Festival and South West Regional Folk Alliance Debut’s in 2004, they are gaining recognition and respect from not only audiences, but from venue owners, engineers, producers and established artists alike: