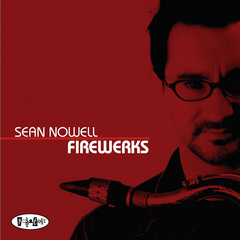 “Tenor Saxophonist/Composer Sean Nowell fuses introspective melodies, darkly hued harmonies and angular rhythmic structures to create a sound that has succeeded at melding, morphing and mixing the best of Blue Note-era small group nirvana with the Headhunters’ pocket and vibe, evolving it to Right Now.” -All About Jazz

“Cerebral music, but played with soul and feeling; ballads that somehow build into frenetic climaxes.” -the Manhattan Times

Bio:
Sean Nowell is a tenor saxophonist and Composer from Birmingham, Alabama steeped in the southern traditions of blues, gospel, jazz, and funk fused with the complex harmonic and world rhythmic concepts that permeate the music of New York City. He Has Recieved Degrees from Berklee College of Music and Manhattan School of Music and His new CD, "FireWerks", has garnered critical acclaim for the band's highly interactive and rhythmically adventuresome approach. He has had multiple tours of China, Bulgaria, Kosovo, Macedonia, Bosnia, Serbia, Romania, France, Germany, Hungary, the Netherlands, Colombia, Venezuela, Singapore and the United States as a Leader and as a SideMan.