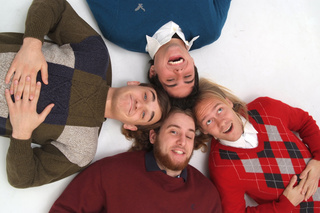 Since it's inception in mid 2005, Second Thief has consistently gone above and beyond the normal expectations of a hardcore band: surviving everything thrown their way and making a name for themselves both at home and across the country. Even the bands hometown of Jacksonville, Florida recognizes it, saying "The band has now completed several national tours....""Second Thief is turning heads all over the country." Yep, that about covers it. Not with a #1 hardcore radio hit from the band's previous full length CD "Threshold", but with the release of the bands most accomplished, mature and diverse collection of songs to date, Second Thief is ready to show what they are made of. "Prelude ep" boasts 3 meticulously crafted songs and a music video to boot. Pick it up on iTunes today and see for yourself...

A stage and P.A. Heck, We don't even need a stage!

Second Thief in Jacksonville Times Union by Jacksonville.com
After embarking on several regional and national tours, our city's own Second Thief is turning heads all across the country
"Prelude" review by Indie Vision Music
When I was younger, I had this friend that loved to perform random acts of e-brake. So you always had to be extremely careful when he was in your car because throughout the winter months when the...
Interview with BlindCore Art e-zine by Blindcore Art
Second Thief are rockin' it out on the Lock n Load Tour as of late, but I encouarge all you myspace fans to check out their page right now! These dudes have a magnificent love for Jesus Christ,...
Second Thief featured band- Metal For the Master by Metal For the Master e-zine
Hometown: Jacksonville, FL.Label or Unsigned: UnsignedWhen was the band established? Mid 2005 Members: Brandon Carroll, Perry Rose, Justin Sanders, and Matthew Brenner What is your favorite venue...
p
A
n
E
F
Song Title by Artist Name