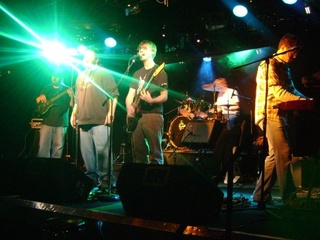 They are the complete package. Sepia Tone formed in April of 2007 and hit the ground running. They immediately recorded their self titled EP (released in June, 2007), and it received rave press reviews.
These prolific song-writers have crafted an arsenal of 30 or more original songs and have an entire library of cover songs at their disposal ranging from Led Zeppelin to Michael Jackson to Cake.

Since playing their first show in June of 2007, they have performed more than 60 times packing most of the major clubs in Minnesota including:

The Varsity Theater, The Fine Line Music Cafe, The Dinkytowner, The Uptown Bar, Trocadero's, Mayslacks, The Acadia Cafe, The Turf Club, O'Gara's, The Whiskey Junction, Station 4, Gluek's, and many others.

This Twin Cities band has been recognized nationally from their success on the fan-based website ourstage.com. Both in February and April of 2008, their songs placed them among the top five bands in the 10,000 Lakes Festival Cosmic Break contest out of more that 400 entries. They received 2 awards recently in October 2008 including top ten in the Jam Bands category and ranked NUMBER ONE in the Funk category!

Sepia Tone continues to work hard on their new album titled “Progress Note” which is set to be released May 8th, 2009 at the Cabooze in Minneapolis, MN. They have spent many long hours working on this project with Matthew Zimmerman at Wildsound Studios in Minneapolis, MN. Sepia Tone is here to stay, and their fans are always asking for more!