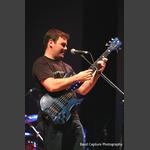 **PLEASE NOTE: Seth Horan's music is available by clicking the links at the bottom of this section - NOT through OurStage!**

Seth Horan is a touring singer/songwriter. And there are thousands of those. He left RCA band Vertical Horizon in 1998, right on the brink of that band's multi-platinum success, and decided to play his songs alone on his bass rather than pick up the traditional six-string acoustic guitar hailed as the universal standard for songwriters. He did this to push the envelope of modern songwriting and performance; he did it to see how far he could go while still being accepted by the mainstream; he did it to explore a new sound in a market that becomes more homogenized every day. But most importantly, he did it because he has been a bass player since he was twelve years old, and he really, really, really sucks at guitar.

Originally hailing from Buffalo NY, he has been touring the USA (literally) since March of 2002, building a sizable following and turning heads with his blend of fingerpicking, slapping, tapping, harmonics, and chording to accompany his voice. To say that Horan plays the bass like a guitar is a vast understatement. More to the point, he plays it like a dulcimer, a drum set, a harp, and a xylophone all at the same time.

This quote from the Ocean City Beachcomber sums it up: "He plays solo bass guitar like Victor Wooten, sings songs like John Mayer and Ani DiFranco, and performs with the intensity of Martin Sexton. Hes a freak of nature, and he's phenomenal."

After a two year relationship with (now defunct) Benchmark Records, culminating in the 2004 release of "Conduit", Horan is once again independent, and has just released the five-song EP, "Happenstance".

Believe it. You need to hear this.