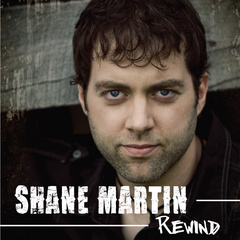 Shane Martin is one of those rare singer/songwriters that writes and sings straight from the heart about real-life conditions and personal experiences. The Minneapolis native has been performing/writing for over 14 years and continues to perform over 150 shows per year The singer/songwriter self-released his first solo album in 1998 entitled “Moody Waters” that featured the song “She Could Cry In Heaven” on the television show “The Young and the Restless”. Shane released “Thread” in 2005 and has shared the stage with bands/artists such as: Peter Frampton, Styx, REO Speedwagon, The Guess Who, and Great White, to name a few. Recorded in Nashville, Shane’s 2010 release “Rewind” has captured the attention of music critics and music lovers alike. - Regional finalist in 2010 Mountain Stage NewSong Contest. - Named top five “Best vocalist and Song of the Month” in Singer/SongwiterUniverse compitions.

Quote: engineer / producer by Kenny Royster
Shane is a great singer songwriter on the teetering edge of country pop and rock where it’s just dangerous enough to be fun." EMMY award winning engineer / producer Kenny Royster.
"Rewind" review by A & R Select
“The singer/songwriting style of Shane Martin's "Rewind" disc starts off with the county pop "Somewhere Real" and never lets its foot off the melodic gas pedal. The crossover appeal is obvious...
NSAI song review by NSAI
Very well written song and very commercial. You are an excellent singer too. I hope you are pursuing the artist thing. You should be very successful. Wonderful work.
2010 Mountain Stage NewSong Contest by NewSong Contest
2010 Mountain Stage NewSong Contest Regional finalist
p
A
n
E
F
Song Title by Artist Name