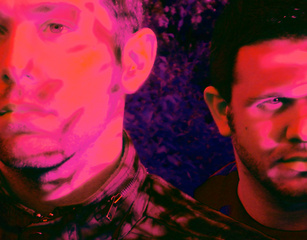 Driven by a belief in catchy melodies, an obsession with synthesis, classical training, and use of emotional (sometimes melodramatic) lyrics, Nick Rossi has always found himself creating not only songs but entire sound environments. He first began writing and producing as the sole member of Destruction of the Shell. After a fateful meeting at a New Years Eve party in 2004, Corey Milbert and Nick began working together with Herman Bauer of Pig Iron, Micheal Haney and Dan Wisnevercanspellhisname as The Paupers. When the Paupers split, Nick and Corey felt an overwhelming urge to continue working together. After a year of failed projects due to a lack of direction and futile efforts to attain new members, they both began to focus on writing, recording and producing as Sharky Kiss. In November of 2007, Sharky Kiss was joined by drummer Dane Juris.

To Sharky Kiss, this music is a way to cope with our outer stresses and our inner demons. A way to approach the very things that seem to sabatoge our way of life without allowing them to overcome us. Combining unavoidable dorkiness, joy of life, hatred of life, love of pure sound, sarcasm, and a bit of paranoia - all with some element of meaning to it, Sharky Kiss has evolved and into what it is and will continue to evolve into what it should be.