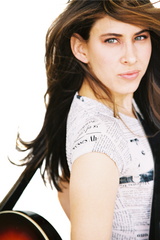 My secrets: First secret admission...I discovered the Beatles late. Well, at least a little bit later than the people who pretty much claim they were chilling in the womb listening to the White Album on tiny Sony headphones. Jon Brion changed my life one Friday night, about 10 years ago at Club Largo in Los Angeles, when he played some wildly gorgeous, intricate, dark, songs with Elliott Smith. I was too young and naive to even realize what I was witnessing. Fiona Apple is a true original and so self-possessed artistically. Love her. Anyone named Elvis. Stevie Wonder's music makes me want to get up, clap my hands, and sing in a gospel choir. He is the human form of joy. Johnny Cash is the closest thing we have to a modern-day American hero and reminds me in some ways of my cowboy grandfather, Barney, who wears sunglasses and boleros at age 93. Lucinda Williams' songs are so amazingly simple and direct (Essence record and "Sweet Old World") they make me want to take up a drug habit. Just kidding, mom. Bob Dylan is some sort of prophet in black sunglasses, who makes me want to read the Bible. Etta James is my biggest singing influence, God bless her. Rodgers & Hart (Bewitched, My Funny Valentine), Ella Fitzgerald, Joni Mitchell, Rickie Lee Jones, Ron Sexsmith, The Stones, Donny Hathaway, Otis Redding, Nina Simone, Sarah Vaughn, Bach, Tchaikovsky, Beethoven, Muddy Waters, Dinah Washington. I do love classical and jazz--I've been meaning to pour a midnight glass of red Shiraz and get deeper into Miles Davis. But, of course, Charles Bukowski's poetry, so raw and real and gross and delicate. What a beautiful monster man he was. Maya Angelou, who makes me want to crawl into golden-lit sunflower fields at dusk to write poetry as the sun fades into stardust. "The God of Small Things" tempts me to steal every line for a song. My tall and beautiful angels who protect me in their swirling white light. Dreaming and waking up in that groggy half-awake state, where the air is open and you can grab the little tiny particle things, the invisible beauty of creativity, passing by. Hopefully you'll touch inspiration. Even for just a moment. contact: info@sherimiller.com __________________ My story: Sheri Miller was born in New York, in an extremely musical and creative home. Her mother was an opera singer and classical pianist, while her uncle was a composer and recording engineer in LA. Sheri began taking classical piano lessons at age 7, but even then at an early age, rebelled by composing her own creative original piano songs, rather than practicing her classical Bach and Mozart. While Sheri was at UPenn, singing in local Philly blues bands, writing songs secretly and feverishly in her bedroom, and getting a degree in English and Poetry, an incredible coincidence happened to Sheri. She began dreaming of a Casio Keyboard over many months, to help her write songs in her bedroom, instead of walking 20 minutes to the jazz piano practice room. One dreamy Sunday morning, after an especially vivid keyboard dream, Sheri took an alternate scenic path to the library, instead of her usual straight path. She passed by a 1-day church sale. To her amazement, she saw and bought the exact same buzzing Casio keyboard she had dreamt of the night before, for $20. This “gentle push” and “tiny miracle” naturally opened Sheri to writing songs on her new keyboard everyday, awakening her artistry. Brimming with inspiration, Sheri moved back to NYC, developing her own sensual soundscape of "hypnotic bluesy American soul meets classic British melodic-pop," and playing in renowned venues like Bowery Ballroom, Joe's Pub, Canal Room, World Café Live, B.B. King's and Hotel Cafe. Upon releasing her critically-acclaimed debut EP, “Mantra” in 2008, Sheri was asked to join a 4-part vocal harmony group, The Delilahs, which signed to Sony Records in Nashville. Since leaving the group, Sheri has opened shows for Shawn Mullins, locally for Norah Jones and Lady Gaga, and co-written with legendary writer J.D. Souther of The Eagles, as well as other Grammy-Award winning songwriters. Sheri is now busy writing songs for her upcoming record, to be released in 2010. _________________ Buzz: “Makes a powerful first impression, and then, even better, a series of more complex and lasting ones.” -Anthony DeCurtis, Rolling Stone “Soulful…excellent…Superb…Her energy burns bright for what I hope is a long and artful journey.” -Mike Cavanaugh, All Access Magazine Exquisite sensitivity...talented…steadfastly original." -Anne O' Neary, Music Connection Magazine Pop music could very well have a new diva to contend with…I love (her)…original…great voice…great lyrical ability, great music.” -Michael Johnson, hotindienews.com “Sheri Miller delivers what so many only reach for: truly inspired, deeply personal, authentically original songs, delivered without pretense in a profound vocal style that transcends her young age. It's a rare gift to work with an artist of her caliber at the beginning of her career. Unless my long experience making records has taught me nothing, Sheri is someone we'll be listening to, and talking about, for a long, long time.” -Ted Spencer, Legendary Engineer/Studio Owner Credits: Stevie Wonder, David Bowie, Roberta Flack _____________

buzz/press summary for sheri miller in 1 page by
“Makes a powerful first impression, and then, even better, a series of more complex and lasting ones.”- Anthony DeCurtis, Rolling Stone“Sheri Miller delivers what so many only reach for: truly...
p
A
n
E
F
Song Title by Artist Name