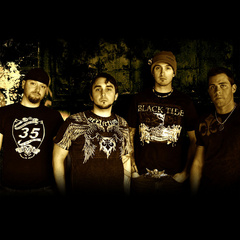 Throughout life, the connection between people can become broken by circumstance. Love and relationships can be destroyed by the distance between souls, and when the ability to re-connect is lost we drift apart. In order to fight through, a common ground must be established. The music of Sixpin is dedicated to creating that common ground; that place where everyone can feel that they are a part of something great. Once a connection is made, the possibilies are endless...

Every person in every walk of life travels a different road. More often than not, though, these seemingly independent people are in fact connected by the world around them. The things, places and issues surrounding us all are what makes us one thing: human. These are the things that inspire Sixpin to create their unique brand powerful, creative and energetic music.

Made to bleed is the bands debut effort and has recieved rave reviews by critics and peers alike. Each song taps into a world all its own and sheds light on questions, and questions things that seem all-to-clear.

All are welcome to stand with Sixpin and find a new connection to the world that is right in front of us. The message is clear, and the connection is made...

Compensation varies and is negotiable on a per venue basis.

2008 Winners - ASCAP/SONY USA Songwriting Contest by ASCAP/SONY
The bands song, "Disintegrate," won them "Honorable Mentions" in the 2008 ASCAP/SONY USA Songwriting Contest. Another of their songs, "Break the fall," won a "runner up" position for the band.
2009 Winners - Taste of Chaos, Toronto by Famecast.com
Based on total individual votes and internet hype, Sixpin won the opening slot on the "Taste of Chaos" tour - Toronto. The band Opened for Thursday, the Cancer Bats and Bring me the Horizon among...