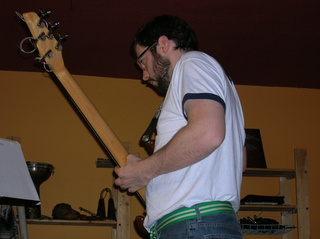 Circle Three & Stationwagon are a person, a band, and an art project (sometimes). We are Urban Folk! Urban Folk is what happens when Folk people live in the city.

Much emphasis is put upon the folk tradition of story telling and the presenting of a positive message of human existence. However, with Urban Folk, that message and story will be mixed with Latin Percussion, African Percussion, Irish Instruments, Toy Percussion, and sometimes a few tasty electronic grooves. Urban Folk is tradition in an Urban setting, the old world in the little ethnic neighborhoods that make up Pittsburgh.

Circle Three & Stationwagon play live about twice a month in various types of venues. When the live setting is a coffee house, the band consists of only Christopher, Jessica & Jeremy. When the venue calls for a more 'full' band, the addition of Patrick on Drums and Bailey on Bass round out the sound to a full, ethnic rich, rock band.
p
A
n
E
F
Song Title by Artist Name