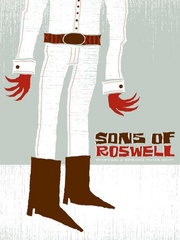 Since the summer of 2005, Sons of Roswell have been on a constant rise. It all started out with a self-recorded demo that spread like a wildfire through the southeastern US, which led to the recording of the group's first full length self-titled album (released March 2007). The band recently left the Nutthouse Recording Studio in Sheffield, AL after recording their yet to be titled follow up album, produced by Jason Isbell (ex-Drive-By Truckers), to be released in May.

In the span of nearly three years since the band has been together, they've played all over the East Coast, from Mobile, AL to New York, NY, opening up for the likes of Jason Isbell and Centro-Matic (MISRA Records). In September 2007, the Sons closed the main stage of the Gateway Music Festival in Mt. Sterling, KY.

Sons of Roswell started 2008 off with a three week tour around the southeast, hitting the cities they commonly play, as well as a few new towns. They have been hailed as one of the best live shows of the time. From the first note, the four members take over the stage with fury and slam into every note as if they're out to kill. It's a beast of its own, and one everybody must witness sometime. You can find the band's music from various online retailer such as iTunes, Ruckus, Napster and more, as well as in many local music stores in the towns they've played.

Roswell Don't Disapoint by Jim Dunn
Thursday night at WorkPlay, Sons of Roswell proved that Alabama's rock bloodlines are in no danger of dying out. Muscle Shoals' Sons of Roswell opened with a blistering 50-minute set. If the...
Sons of Roswell C.D. Review by David Feltman -Performer
Vocalist Kevin Keenum and company present an even mix of bluesy hard rock and punk rock attitude served with a distinctly southern flavor. As a result, the boys of Roswell have created an album...
Sons of Roswell by The Tennessean
Seventies rock, particularly of the "Southern" variety, has been a popular mining source for young rock bands in recent years, but most seem solely drawn to that period's arena rock bombast and...
Jason Isbell's C.D. Release Show by Alabama Ass Whuppin
You ever hear a band for the first time and on their opening riff your face gets all like Eddie Murphy's did when he saw a fine woman in either Delirious or Raw... can't remember which the bit is...
Listen by Andrei Bulawka
The Sons of Roswell know how to make songs sound contemporary without delving into the 70’s rock pastiche that so many artists imitate. It’s pretty apparent that living in the shadows of Muscle...