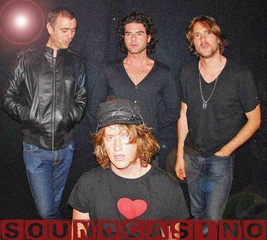 SOUNDCASINO Formed in 2006 this Power Pop-Rock Trio is Sydney's best kept secret. Lush Halcyon Pop Rock Melodies, Lyrical journeys, delicious tasty Rock'n'Roll for the new millenium. The band has been playing the live circuit since formed in 2006 and played all across Australia and America. Their debut album is ready to roll and not to be missed! Make sure you come check out a live show and follow what these 4 mysterious Sydney lads are up 2... Come see for yourself or check out some of the latest tunes online :) PEACE Andy Crosby (Vox, Guitar, Piano) Ant Cooper (Bass Guitar) Crispen Holt (Lead Guitar) Hamish Rosser (Drums)

SOUNDCASINO A SURE BET by 3D world
Sound Casino - A Sure BetAuthor: Carlisle RogersSlated to play the nascent Jim Beam Bourbon Fest - a music festival that looks uncannily just like the inside of a 15 year old boy’s head, complete...
p
A
n
E
F
Song Title by Artist Name