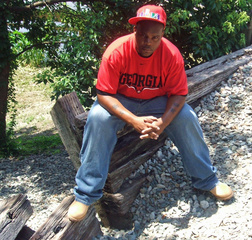 Mr. Michael Witherspoon Sr. is a Thomasville native who has traveled through life’s trials and tribulations. The path of success has not been an easy one, but a path he has chosen. He graduated from North Brunswick Township High School in North Brunswick, New Jersey in 1995. Later he went on to attend Southwest Georgia Technical College where he received his Certification in Emergency Medical Technology. Currently he travels the world motivating, entertaining, and educating young adults on Life Changing Decisions. Mr. Witherspoon hopes by inspiring young adolescence it will aide in beginning his quest in changing the world. Michael "Spoon Gotti" Witherspoon not only write excellent music, but he is a Out-of-this-World Freestyler. He composes,mix,and produce projects for himself and others as well. He has worked with several artist from hip-hop, gospel, rock, country, and spoken word. He is known in the south as the go to man. If you are looking for Swagg, inteligence, expertise, and creativity.....Its Spoon Gotti

Aug. 12, 2008 by
Spoon gotti performs an outstanding show at the Valdosta Performing Arts Center in Valdosta, GA. He has trully presented a new style and swagg that is totally undeniable. Check for more spoon Gotti...
Aug. 23, 2008 by
Rapper Spoon Gotti returns to the city of Valdosta, GA. to bring more of this hip hop that the city is craving for. He is trully an idol for the youth and makes a great icon for our city/county....
CD Release Aug. 2008 by
Spoon Gotti released his first single titled "What It Do". Since 2005 Rapper Spoon Gotti has been developing a new swagg for the rap scene that will be totally different than what most listeners...
p
A
n
E
F
Song Title by Artist Name