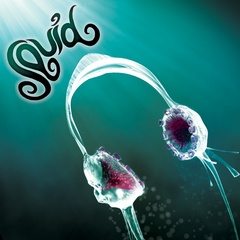 The name “Squid” came from the idea that when writing a song, you actually squirt ink on paper to express things you go through in your life. Much like the squid, that emits ink whenever it feels that something is wrong... Squid are Nir Geva (lead singer), Tal Levi (bassist) and Boaz Wolf (drummer).

Squid's music combines high-end alternative rock and classic pop with touching lyrics. It wasn't until a few years ago that Israeli bands chose to start writing in English. Squid found out that they were not alone as the music scene had started to take a different and more open minded shape. Squid decided that English lyrics are more suitable for their music and will reach a bigger audience. Because of the band’s regional location, they were exposed to musical influences from Europe and the United States, as well as the Middle East, shaping Squid as a solid, colorful and unique band.

review by
Something good is happening in the Israeli music scene. A lot of bands from the "underground scene" are making impressive accomplishments, producing quality albums and touring abroad, getting the...
p
A
n
E
F
Song Title by Artist Name