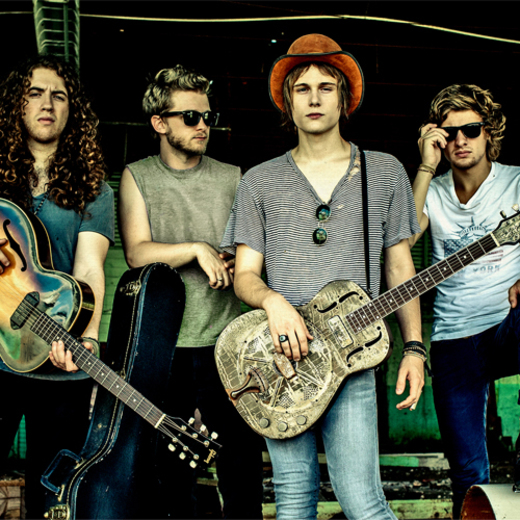 Tyler Bryant was born to play music. The 21-year-old guitar prodigy has been playing since he was six and was bred on the roughneck blues of Muddy Waters, Robert Johnson and Stevie Ray Vaughan.

At age 11, Bryant’s parents found him jamming in a record store with seasoned blues guitarist, Roosevelt Twitty, and they knew their son was destined for something big. Four years later, he was introduced to blues’ predecessor, rock and roll, when he attended a Black Crowes concert. Soon thereafter, he started listening to bands like The Rolling Stones and Tom Petty & the Heartbreakers, and officially became hooked.

During his senior year of high school, Bryant decided to make the big move from his home state of Texas to Music City USA. After meeting with Jody Williams, head of Nashville’s BMI office, Bryant was convinced to head to Nashville where he could hone his craft writing songs while also managing to graduate high school by finishing his classes online

Bryant’s impressive resume reads as if he’s been in the business for decades. Tyler was awarded the Robert Johnson Foundation’s New Generation Award at 16, which pointed him out as one of the most promising new guitarists on the scene.  He was featured in the award-winning documentary Rock Prophecies (one of the most viewed documentaries on iTunes & Netflix), along with Santana and Slash, and was chosen at age 15 by Eric Clapton to play his Crossroads Festival.  Just recently, Tyler was handpicked by Jim Lemley to work on the score for the Fox Studios blockbuster, Abraham Lincoln: Vampire Hunter, produced by Jim Lemley and Tim Burton. Tyler worked on the film’s soundtrack along with Henry Jackman (Hans Zimmer’s protégé). Tyler was also sought out personally by the legendary Jeff Beck to be the opener for his 2011 Spring & Fall tour. Jeff invited Tyler to play with him during his encore set each night – an almost unheard of request from the legend, as the last opener that he invited to play with him on-stage was Stevie Ray Vaughan in 1989. Tyler’s talent has even reached into the gaming world, being the only unsigned artist to have a song in Guitar Hero 5.

Tyler is joined on stage by his just-as-extraordinary bandmates. The Shakedown is comprised of an incredible array of musicians including Caleb Crosby (drums), Noah Denney (bass) and Graham Whitford, the son of Aerosmith’s Brad Whitford (guitar). Together, Tyler Bryant & the Shakedown, tore up the SXSW stage this past year and has built its rapport over several years, thanks in large part to a continuous string of live performances — albeit wide-ranging in nature — from opening stadiums for Aerosmith, Eric Clapton and B.B. King, to playing their own club gigs around the US and in Canada. It’s like being a member of a gang or something," Bryant says of his band’s unified presence, adding that him and his bandmates have become locked in with one another to the point where they can predict each other’s next move. “I know what they’re thinking before they hit the note,” he boasts. “It’s so important for bands to have a chemistry and get out there and play as much as we can. Each player has a personality that comes out in the record.”

2011 was a successful year for Tyler Bryant & The Shakedown. They released their first rock EP, My Radio, in March 2011, followed by a 7-track album From The Sandcastle in September 2011, which garnered early attention when the single “Shackles” was featured as the iTunes Discovery Download. The album was also featured in the iTunes “Rock on the Rise” section for an astounding eight weeks.

Fast-forward a year later and From The Sandcastle is still generating attention – the album’s single “Say A Prayer” is featured in the promotional video for CBS’ new show “Vegas.

Tyler Bryant & the Shakedown, has critics and fans alike clamoring to hear the next project. Wild Child, the band’s shin-shattering full-length debut, is set for a January 2013 release.

“We tracked the whole thing in 13 days with engineer Vance Powell (Jack White, Danger Mouse, Kings of Leon) at his studio in Nashville,” says Tyler. Wild Child was recorded the old fashioned way, on analog tape. But as Tyler says, its sessions felt entirely fresh.

A 12-cut collection, Wild Child is, above all, a culmination of intense bonding, both musically and personally, between Tyler and his bandmates, whom he calls his brothers. Bryant had toyed with the idea of a solo career, but his bandmates, he says, add an immeasurable element. “They were bringing something to the table that I really dug,” he says of his motivations for forming a band. “It wouldn’t be the same without Caleb back there beating the drums or without Graham standing over at the side of the stage looking at me after a guitar solo going ‘I can play that better’ and making me want to play my next solo better. There’s something so much cooler about a band.

The next move for Tyler Bryant and the Shakedown, says the frontman, is to continue building its fan base. Tyler says “the band is more concerned with sustaining a long-term career than having a hit song and flaming out. We want to be one of those bands that builds true fans that stay with us for a long time.

Through it all, Tyler Bryant & The Shakedown has pushed the musical limits of guitar, vocals, and performance, and captured the attention of the music scene with their spectacular talent and rare showmanship.  In the words of the iconic Vince Gill, “To play like this kid [Tyler Bryant] is the rarest of the rare.  Hands down, a future guitar god.”

Interview: Tyler Bryant & The Shakedown LIVE at Pr by Kim Holloway
Band members: Tyler Bryant, Caleb Crosby, Calvin Webster, and Graham Whitford. How did the band come together? I met Caleb at a coffee shop in Nashville and we became fast friends. We listened to a...
From the Sandcastle album review in The Collegiate by Austin Metz
One of the greatest challenges for musicians is to create albums that bring the energy of a live concert. The cheering of the crowd and the buzz created with the band interacting with the crowd are...
Featured Musician: Tyler Bryant & the Shakedown at by Ben Renschen
On a recent and nothing-shy-of-epic road trip, Tyler Bryant & the Shakedown’s seven song album, From the Sandcastle, found it’s relentless repetition zipping through our auxiliary cable,...
Veteran Bluesman Gave Tyler Bryant His Start by Steve Newton
In 1974 Lynyrd Skynyrd recorded a song called “The Ballad of Curtis Loew”, in which a little white kid gets schooled in the art of the blues by an old black guy who plays for change down at the...
Indie Rock Reviews: SXSW Goes Next Level at Bandpa by Monti Smith
The insanity that is SXSW sweeps into Austin on a yearly basis like a galdarn tornado. Madness, Debauchery, Music, Revelry, Music and a little bit more Music touch down on this town and not even...
Guitar prodigy Tyler Bryant shaking things up by
Tyler Bryant & The Shakedown With Frankie Whyte and the Dead Idols Wednesday, March 21, 8 p.m. Biltmore Cabaret, 2755 Prince Edward Tickets: $12 plus service charges at Zulu, Red Cat and...
Take Aim: Tyler Bryant Vs. Amy Sciarretto by Amy Sciarretto
Tyler Bryant, 20, loves music, but he ripped himself away from his beloved tunes and instruments and his band Tyler Bryant & The Shakedown for five minutes to engage in a quick and fun Take Aim...
OurStage: True Grit by Kate B
Tyler Bryant was only eleven when he got the calling. It was in a music store where Roosevelt Twitty, a sixty-three-year-old bluesman, was playing. A decade later, Bryant’s come into his own as a...