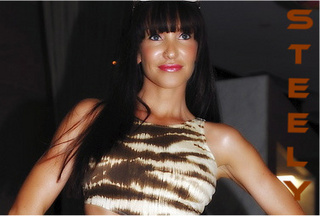 STEELY is a songwriter / singer hailing from EDMONTON Alberta, Canada, who broke on to the US music scene with her sophomore cd "Mood Shifts", which yielded 2 Top 20 singles. The second single, "Simple Girl", held the 10 spot for 11 weeks. Riding the wave of success of “Mood Shifts”, Steely felt the pressure of writing for her 3rd full length CD release, “Signs of Life” , but the first single release ‘Flying Into The Sun’ in 2006 flew up the AC Charts to 14 in just 6 weeks. Simultaneously her Christmas single ’Christmas Wish’ debuted at 32 and held that spot for the holiday season!
The incredible response from radio programs such as

and other media spawned more promotional touring.
She has been seen at the
House of Blues,
the Knitting Factory in Hollywood,
The Mint in Hollywood,
The Rainbow Bar & Grill in Hollywood,
Mickey Mantle’s in New York,
12th & Porter in Nashville
Dan McGuinness in Nashville,
Three Rivers Regatta in Pittsburgh,
at the Gavin Convention, The NAMM Convention, as well she has performed in Orange County and many places in between.
Steely has shared the stage with
Deanna Johnston,
Shawn Rorie,
Chad Quist,
Austin Hartley-Leonard,
Rich Redmond,
Richard Marx,
Oletta Adams,
and has worked with such names as
Mike Plotnikoff,
Zoux,
Ted Burger,
Forrest Robinson
Andrew Lane,
Jonathan ‘Sugarfoot’ Moffet,
Sekou Bunch,
Byron McNeish, & and many more.
Steely recorded at The Armoury in Vancouver Canada, &
SonicWire in Orange County,
all mastering was done at
CAPITOL RECORDS in Hollywood by
the great Ron McMaster.
Steely’s songs have been used on tv shows, and are being heard as far as
CROATIA,
FINLAND,
NORWAY,
GERMANY,
BELGIUM,
SOUTH AFRICA,
ISREAL, SLOVENIA &
POLAND!!!
Steely has recently returned from NASHVILLE & after collaborating with her writing partners Shawn Rorie & Deanna Johnston, they have created a driving, soulfully rocking, undeniably original pop sound that has proven Steely’s growth and staying power! Maintaining the unique styling & honest lyrics , which led to her initial success.
"These songs are probably the most personal, tapping into my own experiences, stories, heartaches, it has been the most ’free-ing’, ’empowering’ experience for me to bring these songs to life!
I am grateful for Shawn Rorie
who is the driving force behind all these songs, and
Deanna Johnston for her never ending inspiration & talent & support!
together we melded all the ideas to create what I feel to be the songs & sound that is by far the truest to me”.

"This collaboration has been the most amazing experience! I have dug deep & really let go...I cannot wait to see you all on the road soon & share in the new music...”

Rehearsals are underway with amazing players, for a tour scheduled in the summer ...details TBA.
HIT ME UP TELL ME YOUR CITY / TOWN SO WE CAN BOOK THERE AND PLAY!!!!!