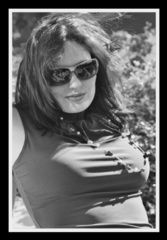 Singer/songwriter Stephanie Raymond, on the verge of her debut album release, has appeared in the European Country Music Association Top 40 Charts with two different songs in four different countries.

Stephanie’s album was released digitally this spring with the second and third tracks, "TRUSTING YOU" and "OWN WOMAN AGAIN" charting over the summer; the physical release date has not yet been scheduled.

Having a strong clear voice and fresh vivid lyrics has contributed to the early success of her music around the globe. From Roots Rock & Contemporary to Honky-tonk & Waltzing Country, her genre-crossing music offers something for everyone.

Stephanie was born in Flint and raised in SE MI. She began singing when she began talking. Her first favorites as a toddler were Bad Boys (theme song from COPS) and Kokomo; she would jump with joy and bouncing curls upon hearing them. As a teenager, Cover Of The Rolling Stone, was a must for any road trip and the whole family would join in. Stephanie has a large extended family that she remains very close with, including grandparents, parents, stepparents, aunts/uncles, cousins, 11 sisters/brothers (including step/half) and the nieces/nephews increase every year.
Learning the meaning of rhyme early in elementary school was the beginning of what eventually turned from poetry to songwriting in high school for Stephanie. Her poetry won her a national award at a very young age and her vivid songwriting has the ability to put you in the scene. Also excelling in the visual arts, her artwork has been displayed at various times since first grade; working in most any medium she can consistently produce fabulous originals.

Elementary school band was a goal for Stephanie, and she chose to play the flute. She continued to play in the band until high school when she took choir for a year or so. Not wanting her to forget how to read music, her parents got her a student guitar and beginners book. Combining a guitar with a choir class and an exceptional poetry skill, her songwriting developed at a rapid pace. Her father, Rod Raymond, gave her an electric keyboard a year or so later and it simply enhanced her abilities, she progressed with it as easily as she did with the guitar.

During her last years of high school Stephanie had the opportunity to play solo acoustic performances of her own work at her school, the local art center and a few coffeehouses and received an overwhelming response. Her voice was growing ever stronger, as she experimented with it, trying new things and testing the limits.

A music career not even a thought at this point, Stephanie prepared, as many seniors do, to go to college. Having about four years of Spanish throughout school and Japanese for the last two years of high school, she loved learning languages and different cultures. She intended to tie linguistics with business and make a go of it. She spent the summer between these last years of school working with U of M, Youth Dialogue project and getting to know and understand other ethnic groups in the metro Detroit area. She also began working a part-time job at the beginning of her senior year.

Stephanie has been very generous with her time and helping others. She has spent many hours volunteering for everything that interests her. Reading to the children at the library and elementary school, helping at the museum and local festivals, coaching the soccer tots, helping and giving blood at blood drives, assisting in charity events and many more things. She is a good athlete, playing softball all her life, she enjoys tennis, rollerblading, bicycling, fishing and reading, learning to downhill ski was a breeze for her and she has recently purchased her first set of golf clubs.

After many months of Stephanie’s mother nagging her father, he set up a recording session during spring break of her senior year. They would be at an old friend’s small private studio where she could test her voice and songs. They put down four songs in a rough demo and brought them home. After listening to years of the exact songs, both acoustic and/or keyboard solos, it was astonishing to hear her voice recorded with full accompaniment to the lyrics, even if rough.

Stephanie had hoped to return to the studio soon, but life happens and it was put off.

BIO Part 2 will be posted soon and will bring you up to date on what is happening.

MB Welcomes Stephanie Raymond by Mitch, Michigan Band News
hopes to make music her career and, with what sounds like a natural gift, we hope the world makes that possible for her."
Europe puts singer on map by Times Herald, August 1, 2008
Songwriter, performer is hit overseas By JESSE DUNSMORE