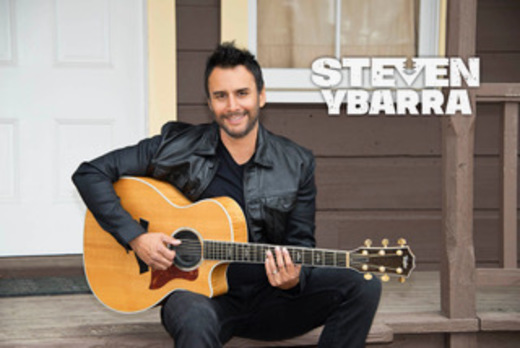 One of the most gifted, honest musicians to emerge from San Diego's thriving singer-songwriter scene in years, national recording and touring artist Steven Ybarra has captivated crowds across North America with his guitar, his voice, and a keen ear for that perfectly melody. Along the way he's earned not just devoted fans, but numerous accolades, including four San Diego Music Awards and a San Diego Songwriter's Guild Platinum Award. Having shared stages with renowned artists including Gavin DeGraw, Switchfoot, Jason Mraz, Jeremy Camp, Sugar Ray and Hootie & the Blowfish, Ybarra is already a hometown fixture. His most recent albums, "Love Love Love," and "Best Days," are succinct gems, set to catapult his solo career.

The world at large is already taking notice: Ybarra recently scored a licensing deal with Universal/Ingrooves for the title track of "Love Love Love." His music, a fresh and melodic blend of gospel-inflected modern country and pop, has been featured on MTV, NBC, ESPN, and in movies and documentaries. He's played the House of Blues, Coors Amphitheater, San Diego Street Scene and L.A.'s famed Whiskey A Go Go among thousands of other stages, from coffee shops to amphitheaters. Ybarra has also used his microphone and guitar to give voice to dozens of charitable causes, including the Surfrider Foundation, the Salvation Army, the March of Dimes and the Leukemia & Lymphoma Society. He's poised for the spotlight, and he's going about it in the most virtuous way he knows.

Ybarra's musical journey began in childhood, like so many other artists. But not everyone had the unique blend of sonic influences — Julio Iglesias, the renowned tenor Helmut Lotti — that spread throughout his Houston, Texas household thanks to his German and Hispanic roots. The distilled essence of the music he grew up with, coupled with the Laurel Canyon-era rock and pop ballads he absorbed as a teenager in San Diego, would come to define Ybarra's signature sound. And the precision and craft he honed during a songwriting stint on Nashville's famed Music Row would ensure that he'd continue to churn out impeccably written hits, album after album.

There is another side of Ybarra's childhood that had a significant impact that carried over into adulthood, and, naturally, seeped into his soulful sound. Ybarra attended Catholic school through 8th grade, which set a spiritual foundation for the budding musician's life and gave his music a sincerity no amount of lessons could buy. He sang every week in church, and by regularly demonstrating his talent in front of his family and the congregation, Ybarra's confidence and stage presence was set at a young age. These first gigs, as they were, showed Ybarra the amazing sense of fulfillment his music could bring to others and himself. In his role as worship arts leader at San Diego's Grace Point Church, Ybarra has given himself a creative outlet for his music, and he's constantly inspiring others to pursue their own creative dreams. Take a listen, and let his music inspire you.

Pat Benatar , Be a Star Contest by Top 4 finalist, KIIS FM Radio Contest
After hearing Steven's perfomance of "One" for the Los Angeles 98.7 'Be A star Contest'hosted by Ryan Seacrest, Pat Benatar, one of the judges, said in her words "Steven could teach Bono how to...
Ybarra defending title of "Best Acoustic" at SDMA by 2009 winner Steven Ybarra is a 2011 SDMA nominee.
Ybarra defending title of "Best Acoustic" at SDMA. Last years winner, Steven Ybarra is among the nominees once again, in the Best Acoustic category. Since winning the 2009 award, Stevens career has...
Steven Ybarra Performance by There is no ignoring him..
“Watching and listening to Steve Ybarra sing persuaded me that there is not a stage large enough to contain this man’s voice. There is no ignoring him, and with his talent, who would want to?”...
Steven Ybarra's music.. by North County Times
“Having worked with a full band, Ybarra brings to his debut a real comfort with overdubbing of harmony vocals, of adding strings to the mix, while not letting any of this distract from the...
Steven Ybarra Performs in Mammoth Lakes by Opening for Gavin DeGraw
Steven Ybarra and Gavin DeGraw share Mammoth Festival Stage" - PR Log Press Release-Sept, 2009
San Diego Songwriters Guild by Steven Ybarra wins platinum prize for songwriting
If anyone deserves to be a snobby in-your-face egotistical rock star, its Steven Ybarra, but instead, and this is what makes Stevens songs so irresistible, what he communicates is the fact that he’...
Steven Ybarra opens for Jeremy Camp by Live performance on the main grandstand SD Fair
Steven Ybarra to Perform Opening Act for Christian Singer Jeremy Camp. Steven Ybarra is one of the hottest up-and-coming Christian artists in the country, and will perform on the Heineken...
Meningitis points local singer along new path by Steven Ybarra Now a Solo Artist
It was a brush with mortality that brought La Costa's Steven Ybarra to the point in his career that he felt compelled to leave a successful band he'd helped found and served as lead singer for 12...
p
A
n
E
F
Song Title by Artist Name