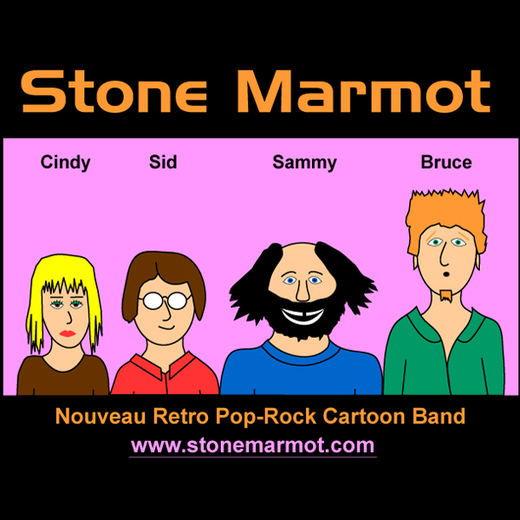 This CD is the result of not watching TV for over 30 straight years.

That’s right! The person who wrote all the songs on this CD hasn’t had a working television in his house since January, 1982. Scary, isn’t it! That could explain the somewhat retro, rather experimental feel to the music, which has been described as sounding somewhere between The Beatles, The B-52s, The Ramones, and They Might Be Giants. This CD is an object lesson in how warped and depraved a television-starved mind can get.

And that’s not all! To make matters worse, since no self-respecting human would stoop low enough to play this stuff, he suckered four poor, innocent cartoon characters into recording his music. Cartoon characters have it tough enough as it is, with people laughing at them all the time, without having to be subjected to this! His poor, unfortunate victims, who refer to themselves collectively as Stone Marmot, are:

This quartet played their little paper hearts out as the ignoble fiend who created them and their music practically produced and engineered them to death. Therefore, for the sake of the cartoons, we hope you give this CD a good listen and try to appreciate their tireless and selfless efforts.

Please! Don’t let this happen to you or someone you love! Be sure you and your loved ones receive a healthy minimum dose of television each and every day.