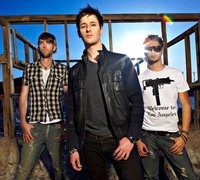 AJDBS Interview by Interview with Alex Millar from Stretford End
Q. How did the project come into existence?A. The band was started when I fought Prentice in a jello-wrestling match in Mexico in 2009. After a lot of shrieking, the match was declared a draw and...
p
A
n
E
F
Song Title by Artist Name