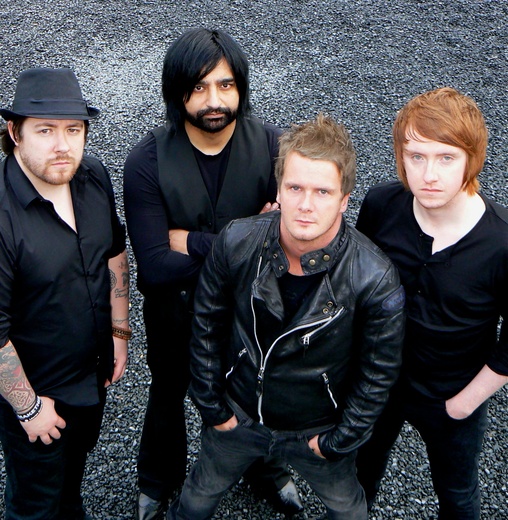 March 2010, and a debut single release sends the Stuntmen around the UK on a tour, followed by a second tour in September 2010. Stuntman Mike have already played in ...many of the UK’s most respected venues including King Tut’s (Glasgow), The Dublin Castle (Camden, London), and the Hope & Anchor (Islington, London) to the notable appreciation of attendees, as well as earning notable support slots with established acts such as The Damned Things, The Virgin Marys, and Gun. Stuntman Mike have quickly gained an army of dedicated fans (The Stuntanians!) and are proud to include the likes of Scotland’s eminent ambassador for new music, Jim Gellatly, and respected music manager Dee Bahl (Biffy Clyro) amongst them. Currently recording their debut album scheduled for a summer 2011 release, Stuntman Mike continue to grow in popularity. Join with the “Stuntanians” on Facebook!

Stuntman Mike by SP Smyth
I can’t gush enough about Stuntman Mike. To again compare them to Kill the Drama, they are one of those bands that manage to make pop music which stings a bit - with catchy, memorable hooks that,...
Stuntman Mike head for King Tuts by Judith Tonner
AN Airdrie rock band are gearing up for a gig at one of Glasgow’s most hallowed venues.Stuntman Mike are set to perform at King Tuts as part of a mini UK tour to promote their debut single, titled...
p
A
n
E
F
Song Title by Artist Name