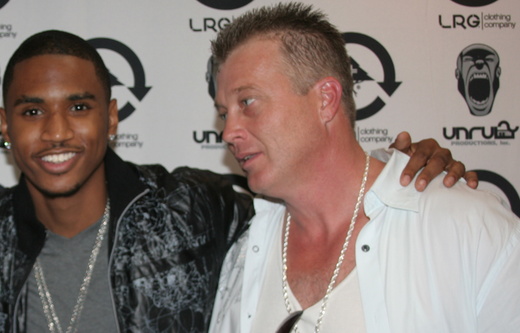 Sweetddy is on a major quest and that is to shake the hearts and minds of the earth, Sweetddy was born On Feburary 3, 1968 at the age of 8 is when it all began, a music teacher would tell the children to lay their heads on the desk and paint a picture to the music that she would play, at the age of 11, sweetddy started writing poetry, and never giving up writing, was attracting a following from going to coffee shops displaying his works, at the age of 26, that is when Sweetddy started doing music, and putting his writing abilities to work, Sweetddy has been producing his own material since 1996, he is a producer, a sound engineer, his skills on the board are what he hears and how the music and product is supposed to come out! Sweetddy got his productions company inc. 1 year ago, but has been producing since 1996. Sweetddy also has a son Young Trev and he has the gift, that boy can spit crazy 16, that will have your head spinning and the delivery that he possess is wicked crazy. Well we hope you like what Sweetddy does. Thanks for checking us out!

Sweetddy Productions on tour by show's,events,google,aol
Sweetddy Productions is going to be on a 4 City tour to see how it goes, First stop in the Atl in the first weekend in May, Then North Carolina in the second weekend in may, then in the third...
Songs On Itunes by songs on itunes, google,
Sweetddy just released two songs on Itunes, in 18 day's over 2 1/2 views and over 15,000 downloads, you can go to www.tunecore.com/music/sweetddy.
p
A
n
E
F
Song Title by Artist Name