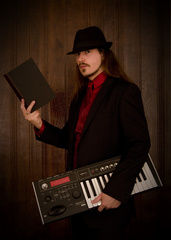 Synoiz is a North East England based, one man effort to combine both Symphony and Noiz into modern, albeit angst-ridden synthpop and ambient industrial. Since starting up in early 2008, Synoiz's music has branched out all manner of different directions from ambient to synthpop to soundtrack to industrial metal, all of which will find themselves on two seperate debut albums which will be released in 2009.
Who knows what or whom Synoiz will be working with next as the upcoming months look to be quite interesting from every angle.

Most likely a decent enough PA and mixer for which to put the laptop and synths through as well as at least two microphones.
Best performance is reliant on laptop based backing track or track-cues but will be able to work to differing degrees with whatever is available providing mic and PA are a certainty.

Fan Review of "Ambients" by
Synoiz is a truly unique project that will take your mind on a journey. I’m not just talking about any journey either; Synoiz has the power to take your mind to places you never imagined. The dark...
p
A
n
E
F
Song Title by Artist Name