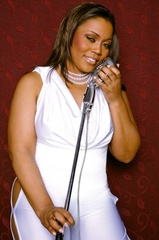 Tamara (Tammy) Nichole Harris is a talented lyricist and vocalist from Chicago, Illinois who is earning her cap as a producer as well. Tammy's music is a smooth blend of traditional R&B soul music fused with elements of Jazz & Funk. Tammy's style had been described by many as reminiscent of the timing of Phyllis Hyman, the vibrato of Stephanie Mills and Randy Crawford, a waver like Denise Williams, and the class of Nancy Wilson.

Tammy’s sophomore project "Natural Vibe" which offers a deeper listen into the artistry of Miss Harris was released May of 2007. This album will features remixes of the title song and "Come Over" by The Remix King, Grammy award winning Maurice Joshua and Rob Diggy whose credits include the Grammy winning re-mix of Crazy in Love for Beyonce. All songs on this project are live band songs with talents lent by some of Chicago's hottest, most sought after and most talented musicians. The title song is collaboration with W. Terence Jackson out of Texas and Clarence Ferguson out of New York. The single is already creating a buzz. This project also features remakes by Tammy’s three female vocalists of all time - Stephanie Mills, Phyllis Hyman & Nancy Wilson, as well as, great new original songs like "Come Over", "Take Me Away", "You Are" and of course the title cut "Natural Vibe"- this entire project is going to be hot! Keep an ear out!

Tammy received an honorable mention in the 2002 & 2003 John Lennon Songwriting Contest for her songs "I'm Through; I'm Done" and "Only To You" respectively. Additionally, "Only To You", "Illusion of Love", "No Other Love", & "Love Your Neighbor" reached the top ten for Illinois, the Midwest, and Top Female Vocal Production with www.broadjam.com. "Illusion of Love" also reached the aforementioned categories, as well as, Broadjam #1 singles. Tammy reached the top 20 with American Idol Underground for "No Other Love."

Most recently Tammy has received several nominations in the LA Music Awards for her songs “Come Over” “If”, and “I Would Be Your Love.” The LA Music Awards is in its 17th year and has some very distinguished past nominees including The Black Eyed Peas, Gwen Stefani and No Doubt, Sugar Ray, Hoobastank and more. Tammy has reached the Broadjam top 10 with her song “Come Over” on the R&B, R&B Soul, Illinois and Midwest charts. “Come Over” also reached #1 on the R&B Soul Charts for Broadjam. Tammy was also recognized in the Song of the Year Songwriting Competition as a Finalist for “Come Over” in August 2006, Runner- up for “Baby I Need You” in November 2006, and Suggested Artist for “You Are” in June 2007. All three songs are on the current project “Natural Vibe.”

And there is more to come...