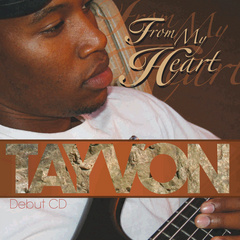 Tayvon born in Baltimore Maryland (USA) grew up around music his entire life. His real passion began at the tender age of seven when he started listening to the legendary “Dixie Hummingbirds” and other Gospel Groups with his father.

By age eleven, after hearing a local musician Michael Wilson play the bass guitar, Tayvon knew that his love of music was sealed. At thirteen, Tayvon received his first bass guitar and never looked back. His father, a Baptist Minister felt it was only right to support his son’s decision to become a great player. His father anointed his son’s hands and prayed for God to bless his son with the necessary skills to be a blessing on his instrument. This inspired Tayvon to come home from school every day to practice, often skipping dinner to listen and memorize music on the radio.

It wasn’t long before people started paying close attention to this young gifted musician, the News spread like Wild Fire! Tayvon didn’t mind sharing his gift with other singers and musicians; he began writing songs for other church groups in the Baltimore area. He was also instrumental in forming his first musical group incorporating the styles of great legends like “Joel Smith” and “Andre Gouche”.

As Tayvon matured musically, he started writing and singing. Often vocally compared to “Stevie Wonder” and “Donny Hathaway”, Tayvon’s songs about life gave his music substance and depth. Although humbled by the thought of being mentioned in the same conversation as these heroes of music, Tayvon holds his own. His distinctive sound and respect for the art of singing are just two reasons why people of all ages and walks of life gravitate towards what he’s offering.

Passion and shear determination coupled with his musical ability makes this 25 year old gifted vocalist and musician poised for a sensational career ahead.