The Adobe Flash Player is required to watch videos on this page
Print !! A.B.Y.S.S. !!'s EPK 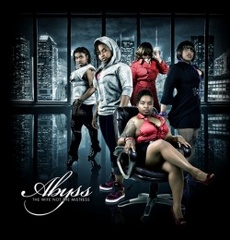 There’s a clear distinction between hearing someone and actually listening to them. Make no mistake; A.B.Y.S.S. is definitely someone that heads need to listen to. Hailing from Plainfield, NJ, the lyrical dynamo pulls no punches on the mic and is as deep as her name suggests. “The meaning behind the name leads to an acronym, Ask Before You Speak Stupidity,” she explains. “If you know the definition of the word abyss, you know that there’s a depth to it where one couldn’t possibly know about everything it contains. I feel that’s similar to myself because you never know what to expect from me. There’s always a twist, I keep it spontaneous.”

NO BRAINER by SIMONE TOUSSAINT, CEO MUSIC INDUSTRY PROMO
As you may already know, the entertainment industry is a tough business and it's even tougher for rappers, far more a female rapper. I have been an A&R for a number of years and although the...
HOLDING JERSEY DOWN by JOSEPH, IREP MAGAZINE
Don't let the pretty face fool you - this chick is DANGEROUS!!"
ONE OF THE BADDEST by R. MASSENBURG, CEO, A&R EXEC
One of the baddest female Mc's in her style. ABYSS, you're a genius!!
TAKING CARE OF BYSSNESS by KATE B. OURSTAGE.COM
A.B.Y.S.S. doesn’t have to worry about her queendom crumbling any time soon. The New Jersey MC constructs verbal skyscrapers, and fortunately her foundation is rock solid.
TRUTH by U.H.S.A.S.I.N. (ASSASSIN), R.N.
FEMALE RAPPERS SHOULD FEAR FEMCEES LIKE YOU...KEEP BANGIN!!"
WOOOOH!!! by MUSIC LOVER, ITUNEYOUIN.COM
This is the kinda S#!T! we need to hear on the radio. Real Hip Hop!!!
LET'S WORK!! by INDIKATOR, ENTER THE ZONE TV
Work it out is dope as s#!t, real rap !! Love your voice, you hurtin 'em. Keep doing that s#!t. I think you're ready."
NEW FAN!! by SIR CALLOWAY, R.N.
You are one of the dopest emcees i've heard in awhile! "Survival", "Get Live" & "Release" are BANGERS! I'm a fan."
p
A
n
E
F
Song Title by Artist Name