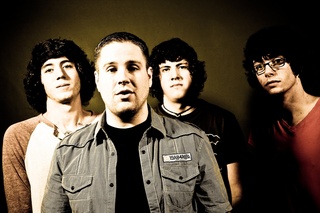 Thank You & Goodnight began as a solo project, which spawned from the mind of vocalist Brock Andrews. He recorded Thank You and Goodnight's first EP in the studio with long time friend Chad Deutsch. The band now consists of original member and vocalist, Brock Andrews, guitarist Caleb North, bassist Daxton Koons, and John "Johnny" Walther on the drums. Thank You & Goodnight is currently working with producer Jason "JJ Killa" Andrews at Spotlight Sound Studio and plans on releasing their full-length album in the summer of 2011. Keep an eye out for the great things to come from this Indiana based rock band. Their catchy hooks, driving beats, and meaningful lyrics will be sure to capture you. Read more: www.myspace.com/thankuandgoodnight

All we need is a sound system to play through.  We would like to have four monitors up front and one for the drummer, but having played various shows at smaller venues with little to offer we feel we can deal with any situation and bring equipment to supplement the sound system as long as notified. We really just have two to three guitars, a keyboard, a bass, and the drum set.  If it's right for the venue we usually use our guitar as side fills to give us a better tone w/volume and better monitoring w/out over powering the crowd.  We need two mics up front: one fore main vocals an the other for various things such as BG vocals and a slight amount of screaming.  Thats pretty much it.

Thank You & Goodnight by DM Jones
If you listen to the whole of this debut by Fort Wayne’s own Thank You And Goodnight without taking a longer glance at the liner notes, you’d never guess that the pounding first number, “Tragedy,”...
p
A
n
E
F
Song Title by Artist Name