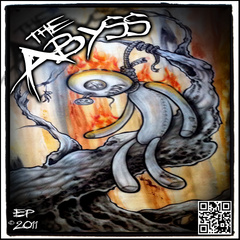 Melodic hard driven bass lines fill your head, while Ronnie shows his playing skills on the bass. Paul's empowering drum mechanics lock everything together. Sean’s unique voice and deep lyrics touch a familiar sadness everyone that has endured at some point in their lives while grasping onto hope and chance for a better future. Doused with the right amount of effects to capture the mood, vibe, and atmosphere, The Abyss stands out on their own upon a sea of imitators in a new world of alternative music.

The scoop on the band The Abyss by Houston Underground on May 3, 2011
The Abyss is one of those bands that you listen to and your just blown away, the music that these men produce is orginal and nothing that is really out right now. In other words there music is very...
Musicians Unite To Help Abyss Singer's Injured Son by Houston Press, Jef With One F
Zain Oliver is the young son of Sean Ozz, front man for dark rock outfit The Abyss and local tattoo guru. Not long ago... well, we'll just let the picture at right tell the story of what happened...
The Abyss' Sean Ozz Talks Rocking And Tattooing by Houston Press
The Abyss is one of those bands that makes everything that happens in the dark all right. Led by the dominating vocals of Sean Ozz, they've had some rocky starts in the Houston music scene.
Jane's Addiction "In The Studio" by Included in Bonus CD sampler.
The Abyss was included in this because they were majorly influenced by Jane's Addiction growing up. They have two songs "This Beautiful Lie" and "Shattered Dreams" included in the sampler.
p
A
n
E
F
Song Title by Artist Name