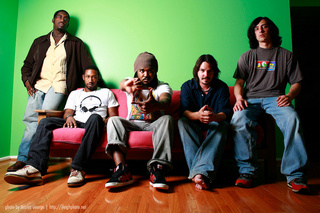 Future is a five piece band formed during the summer of 2006 in the Washington D.C/Metro area. With over fifteen years of combined professional music experience Future delivers an experimentation of sound with influences of hip-hop, rock, reggae and fusion. This youthful and vibrant band owns their unique sound and confidently conveys a style beyond genres by mixing socially conscious lyrics with infectious melodies, beats and grooves.

.:Future independently recorded and released their self-titled debut album in August of 2008. It is now available worldwide on Itunes, Rhapsody and AmazonMP3:.

email us for a stage plot and input list
tech@futureband.net