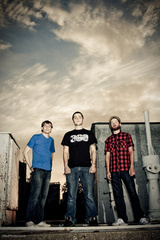 The Bearinger Building was the original stomping ground for artists and musicians alike, located in downtown Saginaw, since abandoned the band has been keeping the spirit of the building alive. We pride ourselves in having a ever changing sound then most, giving you a taste of some original local music from a struggling city in the mitten state.

we bring our own equpiment if need be

2010Best Rock Band,Best Rock Songwriter,Best Solo by Gina Myers
A name new to the Review Music Award scene last year was John Vasquez & the Bearinger Boys, who took home the 2009 award for “Rock Rookie of the Year.” John and his associates proved the band...
MOTM: The Bearinger Boys by middle of the mitten
To say that John Vasquez is the hardest working musician in the area might be a little hyperbolic, but The Bearinger Boys have put out a release each of the past three years (albums in 2008 and...
p
A
n
E
F
Song Title by Artist Name