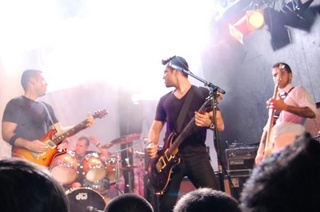 After selling thousands of copies of their self-titled debut album and drawing sales from around the globe, The Better World teamed up with Grammy award-winner Jason Corsaro (Soundgarden, Buckcherry) to record “Broken Memories”. Mastered by Howie Weinberg (Nirvana, U2, Creed), "Broken Memories" captures the intensity of the Foo Fighters and the heart-felt melodies of 3 Doors Down and Lifehouse to form a powerful, hard-hitting album of shout out loud rock songs. All hailing from Bergen County, New Jersey, the band has gained recognition for their energetic live shows and unforgettable hooks. They have sold out top NYC venues such as Rebel and continue to play to packed houses at well known area hot spots. In September 2009, The Better World won the “Next Big Thing” contest on AlternativeAddiction.com and was given the band spotlight feature for that entire month. AA has also named TBW one of the Top 20 Unsigned Bands of 2009 and is currently promoting their single “Counting The Days”, which has been the website's Number 1 song download for 9 straight weeks and counting. Nationally, TBW has placed 3rd out of 2000 bands in the Taylor Guitar Test-Drive 2009 competition. The band has also placed 3rd out of 200 bands in New York City’s Meany Fest competition in December 2009. The Better World is currently touring in support of "Broken Memories" and have begun writing new material for their next E.P. due out in 2010.

Taxi's review of "It's Alright" by Taxi.com
“It’s hard to not be impressed by “It’s Alright”. The melody instantly imbeds itself into the listener’s psyche. It really feels like you guys are pouring your heart and soul into the performance.”...
Review of "Broken Memories" by Changeupmag.com
The album is packed with every element you want from music, from the catchier hook of “It’s Alright” that could easily take over the radio waves, to the in-your-face, angst-ridden, tear-it-up “Only...
Broken Memories Review by Hard Rock House Blog
Great album to listen to while driving and nice compilation and mix of both heavy and light tracks. I would suggest purchasing this record to any fan of good alternative rock. Very cutting edge.
Review of the Band by ientertainmentblogs.com
This is a trio of undeniably talented musicians, who know how to take that talent and weave it into music that can reach out and grab even the unlikeliest fan. It’s hard to find such strong...
Raising Hell in New York City by Illumina All Area Access
The Better World sure know how to raise hell in the Big City. This little band that could, delivers heart-felt lyrics while maintaining their rocker showmanship.
Breaking Big by Yorkton This Week
Definitely a band to watch and a disk that bodes well for them breaking big.
TBW Top 20 Bands of 2009 by Alternative Addiction
The Better World" named one of the Top 20 Unsigned Bands of 2009 in the country"
One Of The Best Albums All Year by Emurg.com
This band knows how to make great heart-felt music. I have to admit it was one of the best albums I have listened to all year."
p
A
n
E
F
Song Title by Artist Name