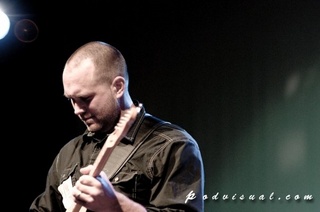 The Blue Method experience is like none other in independent music today. With years of travelling and 2 studio albums already under their belts, the new album Volume LIVE proves The Method to be much more than your average funk band. By combining their blues, funk, rock, and jazz influences with sprinkles of hip-hop and experimental improv, the group has created their own genre: Power Soul. Hailing from “Jersadelphia,” The Blue Method was forged by guitarist Mike Patriarca and saxophonist Tom Long with the larger than life vocalist Brian Williams. Following the release of the critically-acclaimed album Kill the Music: Vol. 1, the Method added long-time friend and drummer Theron Shelton to the mix, also releasing the hit album Kill the Music, Vol. 2. With two albums released and close to 200 shows annually ranging from Montana, Vermont, North Carolina, and every place in between, the fellas filled the bass void with energetic Philadelphia musician Rah M. Sungee, rounding out the sound of the Blue Method and elevating the stage show to a new level. Veterans of the road individually and collectively, The Blue Method has shared the stage with the likes of John Scofield, Ozomalti, Fred Wesley, Lauryn Hill, Fishbone, Chick Corea, Soulive, Bela Fleck and the Flecktones, Otiel Bainbridge of the Allman Brothers, Leela James, and Ween. The Blue Method’s new album Volume LIVE builds on the momentum created by their previous efforts and showcases their instrumental stage chops, matched only by their mature, down-to-earth songwriting. Featuring some reworked favorites from Volumes 1 & 2 and a host of new songs, Volume LIVE is a must have for all TBM fans, new and old alike!

Drummer brings set unless there's a backline in which case he'll bring snare and hardware.

Blue Method brings ‘power soul’ to Warmdaddy’s by Jennifer Lawson
Blue Method brought together blues, funk, rock and jazz with a touch of hip-hop creating a genre they call “power soul” to Warmdaddy’s in South Philadelphia recently. The hard-driving beat of the...
KTM Vol.2 review by Hal Horowitz by All Music Guide
This Philadelphia quartet brings the soul, funk, and jazz in equal measures on its sophomore release. Influenced by the tough vibe of Sly Stone, Rick James, Prince, James Brown, and '70s R&B,...
The Blue Method :: 12.13.08 :: Zeno's Pub :: State by Adam Eshleman
Your typical bar band is, at best, a cheap mode of late night entertainment. With repertoires of songs worn out by years - or perhaps decades - of continual radio rotation, they're likely to leave...