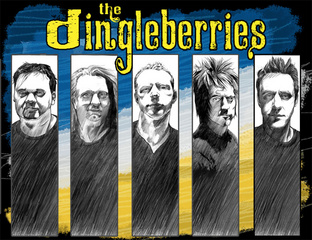 5 vocals mics and stands
5 monitors
4 D.I.'s
instrument mics for 3 guitar amps and a drum kit
24 channel board and snake
main speakers and subs
cables and power for all equipment
*The Dingleberries owns it's own PA, which can be provided.
Stage Plot: 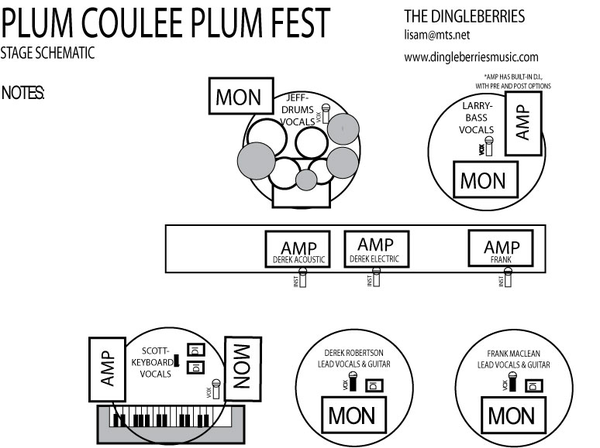 The Dingleberries Live by The Western Canadian Newspaper
The Dingleberries played original music, further showcasing their musical tastes and talents,...a mixture of postmodern rock, folk, pop and country, which translated in a rousing reception for the...
Dingleberries Show Another Gem by The Southern Shopper & Review
The Dingleberries latest event held at the P.W. Enns Centennial Concert Hall was another gem from the highly talented singers and musicians...showing their amazing versatitlity. -journalist Don...
Dingleberries' Music a Labour of Love by The Morden Times
The Dingleberries are an experienced, versatile band with genre-blending original music, and their entertaining live shows are peppered with a vast repertoire of classic songs by great artists....
The Dingleberries First Album by Uptown Magazine
The Dingleberries' music is filled with dreamy harmonies and layered singing, and a fair bit of musicianship finds it's way into the mix. -journalist Mike Warkentin
Dingleberries First Album Reaction by The Winnpeg Free Press
Songwriter Frank MacLean, the heretofore-unkown band's secret weapon, delivers big-league folk-pop ditties...a strong and unexpected debut.-journalist Bartley Kives
Ashore CD Review by Donald McLeod, The Southern Shopper
The CD is just marvelous and one that you can sit back, close your eyes and go on a magical trip along with the band and their friends. To truly get the most out of Ashore you need to listen over...
The Dingleberries "Ashore" Cd Review by The Winnipeg Free Press
...A collection of 12 smartly crafted tunes... a diverse mix of sounds that shows off a wide range of songwriting styles and influences from the veteran quintet.