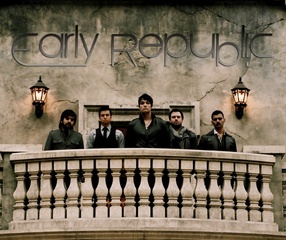 With their self-titled, debut, full-length record, set for release in Feb. 2009, THE EARLY REPUBLIC is on the brink of becoming the next band you can't miss when they roll through your town. Hailing from Dallas, Texas this five-some cites a wide array of classic musical influences such as The Cure, Led Zeppelin & The Beatles, as well as current indie pop favorites The Bravery, Muse, Snow Patrol and The Killers. With such refined hit-pop musical influences THE EARLY REPUBLIC has succeeded in creating a familiar electronic pop-rock, bass driven sound that is not only cutting edge, but is extremely memorable and radio-friendly. THE EARLY REPUBLIC’s self-titled, full-length, debut album features the anthemic, sing-a-long, hit single “Rescue Me,” which, according to Dallas’ KVRK 89.7 “Power FM”, has already become the “most requested song” in the history of their Monday night All Request Show, after just one day on the playlist. “There’s something very exciting about THE EARLY REPUBLIC and Power FM is excited to be a part of their success,” said Power FM weekday afternoon jock and Music Director Drue Mitchell. The natural follow up single will to be the beautifully somber lyrical soundscape titled "What Was I Thinking?"; which illicits thoughts of the Goo Goo Dolls when Johnny Rzeznik is at his love-struck, heartbroken best. Originally formed in 2006, under a different band name, brothers Dave & Ismael Martinez, along with Tony Gonzalez, rounded out the line up with Zane Latta & Oscar Robles through mutual friends. The resulting union brought an early incarnation of the band the privilege of being selected as a Finalist on FOX's hit reality TV show "The Next Great American Band" taking them all the way to Hollywood, CA. "Being in L.A. brought the band closer together, it gave us a sense of urgency and was a great experience for all of us." says Latta of their first taste of success on the national level. On the road, THE EARLY REPUBLIC routinely supports touring national acts as well as regional favorites such as Odis, The Burning Hotels, Radiant, Luma, The Campaign, Green River Ordinance in all of D/FW's best venues and is currently booking more regional shows to showcase their music to any and all that will listen. With an energy that that is as pure as the sweat they give forth each night, THE EARLY REPUBLIC sell themselves out completely for their audiences. Those that are lucky enough to discover THE EARLY REPUBLIC do not soon forget the upbeat rhythms, driving beats and amazing melodies of this young band with such an extremely bright future. Look for THE EARLY REPUBLIC to break new markets in the Southwest, and continue winning over new audiences, throughout the Southwestern U.S. in 2009.