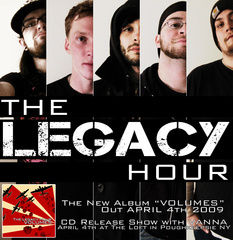 In late 2005, a band called Separation/Anxiety disbanded, and it's member's continued on to do their own thing. College, jobs, other bands, and so on. But during the summer of 2007, vocalist Pat Grasso and guitarist Alex Patrick began to ponder the idea of working together again musically. To step it up another notch, they decided to call up their old drummer, John Tagley, and found out he was interested too. With ideas brewing, a new project was in development. Soon two new bandmates would be recruited to join as well. For guitar they brought in Andrew Formale, whom Alex had worked with in what became Of Sound and Silence. And on bass came Ian Morris, whom John played with in Panic Theory.

With many new ideas, they began to set this band in motion, pumping out brutal yet melodic music right from Day 1. And this is only the beginning. A new day for an age old declaration. The time has come, and this... is THE LEGACY HOUR.

Within 9 months from their start, THE LEGACY HOUR had recorded and released their first recording ever, the crushing EP, "Like The Failures Before You." With even more new music in mind, they were back on the warpath immediately, with more original and innovative work to create.

We have:
2 Half Stacks
1 Drum Set
15inch Bass Combo