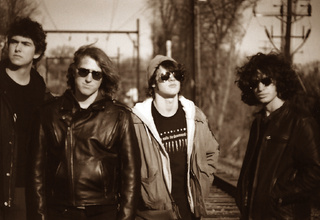 Think that true rock and roll is going extinct? These guys will prove you wrong. They play chill-inducing epics along with dirty dark blues jams that rewind time a few decades. Take one listen to the band’s new EP and you won’t doubt a word that has been written here. www.thelonepinecones.com Originally from Bucks County, PA, The Lone Pine Cones all attend Northeastern University in Boston and are really starting to infiltrate the Boston music scene. You would have a very difficult time finding a more passionate and dedicated band in Boston. The fan base builds every show as people come up to the band demanding to know why they haven’t heard of them before. The Lone Pine Cones are sure to go very far. The band originated around 2002 and has been developing since then into the powerhouse of sound that it is today. Their main influences come from Black Rebel Motorcycle Club, The Secret Machines, Led Zeppelin, Fleet Foxes, and Grizzly Bear. The Lone Pine Cones play their own brand of psychedelic rock mixed with folk. Dark bluesy songs are induced with complex folky harmonies to create a sound that everyone can enjoy. Their electrifying performances always leave the crowd wanting more. Notable venues played: Philadelphia: World Cafe Boston: TT The Bears, All Asia, Harper's Ferry, and Church Doylestown, PA: Moose Lodge, Cigar Parlor