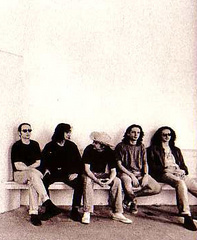 Legendary Edinburgh Band - The Lost Soul Band will be re-forming for two very special shows - Glagows King Tuts and Edinburghs' Liquid Rooms.
These dates will coincide with Release of a brand new version of their classic track You Can't Win Them All Mum ( Featured in this EPK ).

Since the bands demise in the mid 90's the Lead Singer Gordon Grahame has achieved acclaim with his track You're Lovely To Me which is being used currently in the Kingsmill Bread advert and has gained an international fan base under his alias Lucky Jim.

Here , an excerpt from The Great Scottish Musicography by Martin C. Strong

One of the most criminally overlooked bands to come out of Scotland in the past fifteen years, The Lost Soul Band somehow slipped through the net... In Gordon Grahame, The Lost Soul Band boasted a songwriter of breathtaking depth and ability, a man more than capable of following in the footsteps of spiritual mentors Bob Dylan and Van Morrison.
From the early days on the Edinburgh pub scene.The Lost Soul Band quickly attracted a loyal following in Edinburgh, Glasgow and even London where the band gigged regularly at The Mean Fiddler and The Borderline.