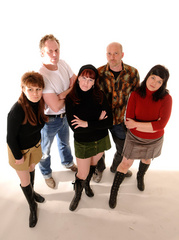 The Lovebullies have been wowing audiences for years with their infectious blend of brainy, fun, poetic lyrics and fun boppy dancable tunes. Each of them seasoned professionals, they have come together with an abundance of energy for their craft. Packing halls and clubs wherever they go is testament to their ability to entertain and as fun to watch as to listen to this group will definitley make a lasting impression on the Canadian music scene.

Their first album released in 2008 entitled "When I Get Through With You" features the individual songwriting talents of singer Caroline Connolly with guitar player Chantal Vitalis. Backed by bassist Joni Brent, guitar virtuoso Kevin Herring, vibe player/backup singer Andrea Revel and drummer Paul Jahn they make a rocking team.

The album has been in rotation on Canadian radio stations such as CKUA, CBC and CJSW. They are currently #4 on the CKUA charts.