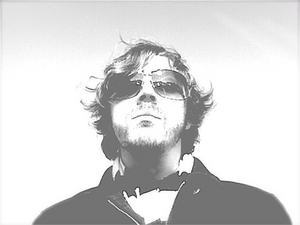 Thank Yoow!
Ladies and gentlemen, it's really great to be here tonight ! I'd like to introduce the boys in the band. On Guitar we got Miguel Oria! *weedely-weedely-weedely-wreeer* On the Bass guitar it's Zak Durst! *bum-de-dum-dooba-da* Over there on Keys and random sound F/X it's Eric Barton! *wreer-da-da-da-da-da-da-da-da* and give it up for the Drummer, Derek Wright! *flockada-dockada-boppada-csshhh* My name tag says Matt and we are here to rock your socks off!

Unfortunately, the proprietor of the club has asked that we urge you to put your socks back on. Health code violation, I guess..."

Going on an Ego Trip by BG News - Pulse
Chuck Taylors, leather suits, movie star shades.The Matt Truman Ego Trip might appear to be your average, local, rock 'n' roll band, with a slight hint of conceitedness, but they actually have...
From the rolling, sermon-like vocal diction to... by CMJ.com
From the rolling, sermon-like vocal diction to the crashing percussion, “Industry Standard” is a perfectly worthy soundtrack to the best mohair-clad go-go movies; not to mention the awesome...
Rock and Roll here and now by Boston NOW
thursday july 5, 2007 BOSTONNOWMUSIC The Matt Truman Ego Trip has been described as the MC5 meets “Exile on Main Street” but don’t call it a throwback. “We’re not ‘retro’,” says band leader Matt...
...infectious and lyrically burning rock... by Sentinel~Tribune
For self-described “nerdy dude who studies music at some community college,” local singer, songwriter and guitarist, Matt Truman has certainly found a way to break out of his sometimes less than...
the Matt Truman Ego Trip wastes no time by CMJ.com
MATT TRUMAN EGO TRIP: Everybody's Got OneBy Eric DavidsonAvailable photos of this Bowling Green, Ohio combo imply that their costume budget only allows for gas station shades. Or maybe it proves...