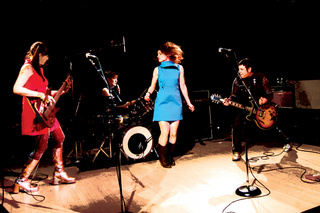 Little more than a year old--they played their first show in January 2009--the Maybenauts have the sort of imaginative arrangements (glam-rock to psychedelic pop), sophisticated melodies (three-part vocal harmonies a specialty) and cohesive vision (think of a '60s go-go bacchanal in outer space) lacking in many power-pop groups that have been slogging it out for a decade or more." --Jim DeRogatis, Chicago Sun Times The Maybenauts make glam-pop girl rock... with a space panda! Their music is glitzy and dynamic, rich with three-part harmonies, danceable grooves, and air-guitar-inspiring rock riffs. The band's powerhouse rhythm section (featuring Ellie Maybe on bass and Emily Agustin on drums) provides the backbone for the anthemic and intricate guitar work of the upside-down-and-all-over-the-place Space Panda, also known by his earth name: Vee Sonnets. Fronting the group is the adorable and vivacious singer Leilani Frey, whose voice moves seamlessly between angelically tender to balls-out belting. With harmonies and hooks inspired by artists ranging from Heart to The Kinks to The Go-Gos, the Maybenauts' songs are fueled by the audacious passion of arena rock glory. This band has a touch of that something-for-everyone vibe, but they create a unique brand of pop/rock music that is all at once saccharine, scandalous, and out of this world. “The Maybenauts are pure awesomeness. This Chicago four-piece belts out bouncy, sugary, pop rock that you cannot get out of your head. They even have a panda! This is a band not to be ignored; local radio stations like Q101 and 93 XRT are already paying attention and playing their super catchy track “My Head is a Bomb,” so what are you wanting for?” --Audrey Leon, Loud Loop Press

Women Who Rock Wednesday: The Maybenauts! by Stephanie Kuehnert
As I mentioned last week, tomorrow (Thursday Janaury 28th), I'm going to this incredibly rad concert called Girls Out of the Garage at Lincoln Hall in Chicago. It starts at 8, is only 10$, and if...
Meet the Maybenauts by Loud Loop Press
Rock music has always skewed toward worship of the ones who exude cool. Chicago quartet the Maybenauts hope audiences discover that dorks have more fun.“We don’t want people to think we’re cool; we...
Go to This: Girls Out of the Garage by AssaultBLOG
The Maybenauts: These guys list some truly ridiculous influences on their MySpace (“The Zombies, Duran Duran and Kraftwerk in a rock-and-roll blender,” for example) but the music speaks for itself:...
Daily Diversion: Girls out of the Garage by Loud Loop Press
Three reasons to brave the cold and come out to Lincoln Hall tonight…1. The Maybenauts are pure awesomeness. This Chicago four-piece belts out bouncy, sugary, pop rock that you cannot get out of...
Local Bands Raise Awareness for Abused Women Injustices by Lumino Magazine
Written by BARMEY UNG / Photos by BARRY BRECHEISEN Thursday, 31 December 2009Connections for Abused Women and their Children (CAWC) hosted it’s second annual benefit concert entitled Covers to...
Review of Girls out of the Garage by Loud Loop Press
Once The Maybenauts hit the stage the mood lightened considerably. The pop rock four-piece’s only male member, guitarist Vee Sonnets, proudly sauntered on stage dressed as a panda. Lead singer...
Girls out of the Garage Review by Familiarize Yourself
Excerpt:From the moment The Maybenauts took the stage with their sonic smiles and silver outfits, it was clear that their sound was going to be less sporadic and fueled more by danceability. To my...
Demo2DeRo: The Maybenauts by Jim DeRogatis (Chicago Sun Times)
Little more than a year old--they played their first show in January 2009--the Maybenauts have the sort of imaginative arrangements (glam-rock to psychedelic pop), sophisticated melodies...
p
A
n
E
F
Song Title by Artist Name