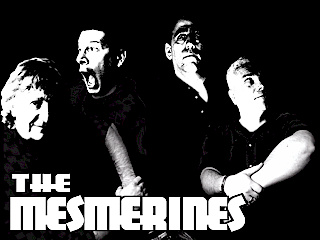 The Mesmerines are now actively promoting their first 4-song EP. Produced by Hugh Wyman, one of Boston 's best new producers, the EP is a sonic tour de force of songwriting skill and musicianship, providing a small taste of what the public can expect when the band returns to the studio to begin work on the LP this fall. Radio friendly yet uncompromising, stark yet hopeful, The Mesmerines are obviously angling themselves to be considered as not only exciting live performers, but unique and exceptional songwriters as well.

Currently the EP is on the playlists of several college radio stations around the country after the band's nation-wide live debut during the IBS-Palooza festival.

We are flexiable but require monitors and someone on the soundboard

Review October 2008 by The Noise
At long last, a 4-song CD that hasn't been thrown together for the sake of releasing whatever the band could muster up. The Mesmerines, four veterans of the local post-punk scene of the '80s and...
Boston Top Ten by The Noise
8. The Mesmerines by The Mesmerines.Boston’s latest super group of sorts get it just right on this enjoyable 4-track EP. New wave, punk, and alternative mesh perfectly without ever losing its...