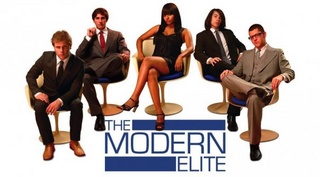 In a world overcrowded by identical and unoriginal pop bands, Boston's female-fronted rock outfit The Modern Elite are truly a breath of fresh air. Talented young songwriters Rebecca Frank (vocals) and Trevor Peckham (guitar & vocals) draw from completely contrasting influences, flawlessly creating their own unique sound. The bass lines of Tommy Turbo and jazz-infused drumming of Clark Davenport add flavor and power to every song, while lead guitarist Justin Tufariello shows off his chops with intricate solos. In the spring of 2009, the band unveiled a three-song digital EP, which received critical acclaim across local and national scenes.This November, The Modern Elite will release their full-length album, Blind, which includes enhanced versions of the EP songs, as well as live favorites "Obsession," "Hold On" and "Nowhere to Go." Get ready, because The Modern Elite are taking the best parts of all of your favorite bands to make female-fronted rock like you’ve never heard before.

"This rock band is on the brink of something big!" by OurStage.com
“Take some killer classic guitar runs (like the ones you enjoy from Jack White) and some rockin’ chick vocals (similar to those of Hayley Williams of Paramore), and you’ll get something like The...
"Strong female vocals with great guitar work" by Under the Gun Review
“It seems in the age of Paramore being one of the largest pop rock acts in the world, we’ve been welcomed into a world flooded with bands who have a girl vocalist for the sake of matching the trend...
"Unique, new and energetic" by Crescendo Magazine
Without a doubt, the anthemic lyrics from The Modern Elite serve as a vent sing-a-long for girls alike coping with angst and mending a broken heart. With tantalizing guitar solos accompanied by the...
"Punk rock passion" by The Noise Boston
“It’s not easy to pull off blending heavy throwback vibes from, say, the ’90s, with a modern indie pop feel, and vocals that deliver with punk rock passion, but the Modern Elite achieve just that...
p
A
n
E
F
Song Title by Artist Name