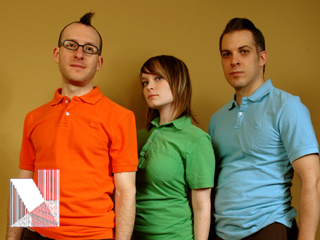 The New Loud stretches the mold of the traditional punk band by incorporating electronic elements such as keyboards, sequences and synth drums; while retaining the essence of the protopunk archetype – raw energy, manic tempos and immediate lyrics.

"The New Loud isn't so much loud as it is frenetic and intense. (the band) has melodies and harmonies shooting from every part of the stage. It's a punkish, New Wave-y, dance-y sound reminiscent of Pavement, Rancid and Franz Ferdinand." -L. Bose for MKE Magazine November 2006.

In 2001 Radish Beet(drums/vocals) and Shane Olivo(guitar/vocals) form The New Loud. 3 years later, Jessica Nakles joins the band on keyboard/vocals. These 3 members are the core of the band that remains today.

In 2005 the band enters Shane Olivo’s studio, Bobby Peru Recording, to record the EP entitled ME(secrets)YOU. Over the last 10 years, Bobby Peru Recording has been host to many indie, punk, hardcore bands including the first Fall Out Boy split and full-length(Uprising Records), all releases by Beatallica(Oglio) and ‘Blown to Bits’ by The Box Social(No Karma).

November 2006, The Planetary Group, picks up ME(secrets)YOU for a US college radio campaign. The EP is added to over 135 radio playlists. ‘Secrets’, the title track from the independent release, gets picked up for Abercrombie & Fitch promo as well as a 6 month run on the Holister Co. website including in-store rotation. This exposure leads to over 40,000+ Myspace plays in less than 12 months.

The New Loud has been actively touring for 2 years. In 2007, the band played 40+ dates all across the USA including a 10-day West Coast Tour, 6 Chicago stops, 2 shows in NYC, several Midwest runs plus an opening spot for the venerable Ataris. Early 2008 the band was picked for Texas Rockfest, an outdoor festival in downtown Austin, TX that runs concurrent with SXSW.

Currently the band is writing and demoing material for their first full-length to be released in Fall 2008/Winter 2009.

THE NEW LOUD - ME (SECRETS) YOU by Amplifier Magazine
New wave revivalist pop fans have a new band to fall in love with. The New Loud is a brilliant pop machine, an unstoppable beast bursting with strange, staccato rhythms guaranteed to sock you onto...
The New Loud - Me (Secrets) You by Pop Matters
Currently working on a full-length studio album, The New Loud releases Me (Secrets) You, a four-song EP to whet the appetites of fans and potential fans alike. Catchy and bouncy, with a plasticine...
THE NEW LOUD - ME (secrets) YOU EP by FFRUK.com
The New Loud were one of the best Indie bands I had heard in 2006 and since picking up their EP I havent stopped playing it! Theres some great tracks on ME (secrets) YOU which surprised me as...
The New Loud - ME(secrets)YOU by Evolution of Media
When I first popped The New Loud's Me (Secrets) You into my CD player, I was having one of those days where even the tiniest endeavor seemed to go awry. Whether it be the zipper on my jacket...