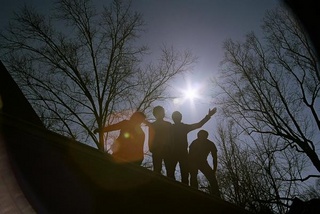 The No-Shirts is a group of four creative, witty individuals who love to play music. With influences like The Beatles, The Strokes, and Bach, The No-Shirts make energetic, melodic music that’s appealing to the average listener as well as the harmonically aware. With their sophomore CD “Stuck In Suburbia” ready to make waves, The No-Shirts are concentrating on the important stuff; the fans. Going to a No-Shirts show is something of its own mostly because the band strives to make each show a cherished memory for the fans as well as the band. They do this because they know that without the fans the music goes nowhere. Hoping to expand their strong foundation in Bergen County, the band wants to reach out to new audiences in every direction possible. The No-Shirts plan to spend the rest of 2008 playing better shows and writing better songs.

The No-Shirts Take 5th by
In the spring of 2007 The No-Shirts took part in a 5 month long Battle of the Bands hosted by Jersey Shows. The No-Shirts advanced through all 5 rounds to get to the finals and play at Starland...
p
A
n
E
F
Song Title by Artist Name