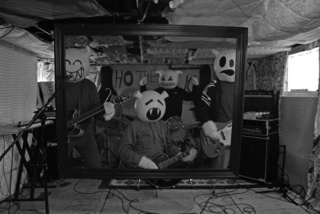 April 7th, 2006 Vivek Mahajan (co-founder and lead vocalist of Asthmo) leaves his own party to "take his meds." Two days later Jason Matthew (co-founder of Asthmo) goes to Viveks apartment to find three officers outside. Vivek has overdosed, dead at 24. Jason Matthew quits his job, locks himself in his room, and disbands Asthmo.

Two years later Asthmo is back, kind of. The band is now called The Nuclear Children, both a tribute to their parents generation as well as a descriptor for the current state of todays youth. Original members Jason Matthew (lead vocals, guitar, keys), Rory Daniel (bass, vocals), and Ray Porea (drums) are now joined by Matthew Gene (lead guitar, keys, accordion).

The Nuclear Children have been described as Metro Pog Rock or Modern Retro Progressive Pop Rock. Their music fuses the simplicity, fullness, and melody of older music with the energy, intensity, and sarcasm of modern hymms. The Nuclear Children have drawn comparisons to such bands as: The Dandy Warhols, Modest Mouse, The Pixies, The Kinks, Louis XIV, Social Distortion, Apples in Stereo, and more.

The Nuclear Children are currently in studio recording their first full length album titled "10 Sordid Tales of Schaden & Freude" due out late 08/early 09 on Champions of the Arts Records. Paint it Red is the first single released from the forthcoming album. Here is some of what people have been saying about Paint it Red:

"The Nuclear Children are the leaders in the battle against Shitgaze. They are the next wave of Columbus sound. Spin this"
---Mike Folker, DJ at CD101.1FM